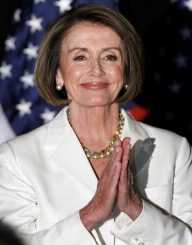 Nancy Pelosi is an American Democratic politician. Born on March 26, 1940, she is the first Californian and Italian-American to lead a major party in the House of Representatives. She has since 2011, served as the Minority Leader of the United States House of Representatives and represents most of San Francisco, California. She is the representative of California’s 12th congressional district. She is the only woman to serve as the House Speaker after she became the 52nd House Speaker serving from 2007 to 2011. This makes her the only American female politician in history to attain the highest political office.

Nancy Pelosi was born on March 26, 1940, to Annunciata M. "Nancy" D'Alesandro (née Lombardi) and Thomas D’Alesandro Jr. She is the youngest of six children. Her father was Democratic Congressman from Maryland and later Mayor of Baltimore. Her brother also served as a mayor of Baltimore from 1967 to 1971. She received high school education from the Institute of Notre Dame and later enrolled at Trinity College in Washington, D.C. She graduated with a B.A. in political science in 1962.

Nancy Pelosi, a Democrat, started politicking at a young age since her family was full of politicians. After graduating from college, she did her internship at the office of Senator Daniel Brewster. After getting married, she moved with her husband to settle in San Francisco, where she worked her way through the ranks of the Democratic Party. She was elected a Democratic National Committee member from Californian in 1976 serving until 1996, and as Northern California party chair from January 1977. Pelosi also served as the party chair for the California Democratic Party from 1981 to 1983.

On April 7, 1987, Nancy Pelosi won a special election to become the US House of Representative from California's Eighth District, which includes San Francisco. This was after the death of the Sala Burton, the incumbent. She has since then been re-elected ten consecutive times. Since the area is one of the safest seats of the Democrats, she faces no dangerous oppositions during elections.

Nancy Pelosi has served on various committees including the Appropriation and Intelligent Committees. She was a ranking Democrat on the latter until becoming the Minority Leader. She also serves on the House Baltic Caucus. In 2001, she was elected as the House Minority Whip, becoming the first woman to hold that post in the history of the United States. She replaced Dick Gephardt as the Minority Leader in 2004. With this position, she became the first woman to lead a major party in the House.

First Female Speaker Of the House

Tenure As A Speaker

During her tenure, Nancy Pelosi opposed plans by then-President George W. Bush proposal to reform Social Security to allow workers redirect some part of their social security withholding into bond and stock investments. She was able to prevent plans by the Democrats to impeach President Bush for going into the Iraq War on false grounds. Bush had told the Congress that Iraq was in possession of weapons of mass destruction, which was a threat to the United States and its allies. However, these allegations turned out to be false. His authorization of wiretaps without a warrant was also in violation of the civil liberties of Americans.

Nonetheless, Nancy Pelosi blocked the impeachment process. Pelosi supported and championed the passage of the Obama health care law. While signing the bill into law, President Obama acknowledged her as being "one of the best Speakers the House of Representatives has ever had."Her tenure ended after the Democrats lost the control of the House to the Republicans.

Nancy Pelosi became the Minority Leader for the 112th Congress after the Democrats lost control of the House of Representatives. After the 2016 presidential election, some Democrats called for the replacement of Pelosi. On November 30, 2016, she defeated Tim Ryan by 134 to 63 votes to maintain her position as minority leader.

Nancy Pelosi is married to Paul Frank Pelosi on September 7, 1963, at the Cathedral of Mary Our Queen in Baltimore. They met while she was at Trinity College. The couple has five children; Nancy, Corinne, Christine, Jacqueline, Paul, and Alexandra.