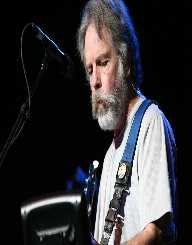 Brent Mydland was a German-born American musician who is best known for playing keyboard for the band, the Grateful Dead.

Mydland’s father was a chaplain in the United States of America’s Army who was based in Munich, West Germany. It was in Munich that Mydland was born on 21 October 1952. His family soon returned to America after his birth and moved to Antioch in California. His mother worked as a nurse. Mydland began practicing music from the age of six. He began by trying to copy his sister, who was receiving piano lessons. Mydland began taking formal piano lessons while he attended elementary school. He also played the trumpet. He played trumpet in his high school marching band but was later asked to leave due to his long hair. This led to him focussing his musical aspirations on the keyboard. Mydland then began to be influenced by rock bands and in particular Steppenwolf, Jefferson Airplane, and the Grateful Dead.

Mydland began playing with friends and local bands before being invited to join L.A group, Batdorf& Rodney. He then formed his group called Silver which lasted for two years. Mydland then played keyboard with some L.A bands until he joined the Grateful Dead in 1979. After just two weeks in the group, he was performing at the Spartan Stadium in San Jose. As well as playing keyboard Mydland also contributed vocals and songwriting to the group.

Mydland contributed two songs to the band’s 1980 album, Go to Heaven. The album reached number 23 in the American pop charts. Mydland also wrote Hell in a Bucket and Tons of Steel, to the 1987 album, In the Dark. The album reached number six on the American Billboard charts and Mydland’s song, Hell in a Bucket, reached number 3 in the mainstream rock charts. The 1989 album, Built to Last featured four tracks which Mydland received writing credits for, Just a Little Light, We Can Run, Blow Away and I Will Take You Home. The album peaked at number 27 on the Billboard 200 charts.Mydland played with the Band’s hit, The Weight. While in the Grateful Dead Mydland continued to perform and record with some smaller groups. He played with Bobby and the Midnites and Kokomo as well as performing with his group, Go Ahead. Mydland also worked on solo projects but never released a solo album.

Mydland was married and had two daughters. He wrote I Will Take You Home as a lullaby to his children. He became estranged from his wife, Lisa, and turned to heavy drinking and hard drugs. It is suspected he began to suffer from depression and on 2 July 1990 he overdosed on a combination of cocaine and morphine. In his will, he left his estate to his friend James Whitmer and cut his family out of any inheritance.

Mydland was inducted into the Rock and Roll Hall of Fame in 1994 as a member of the Grateful Dead.