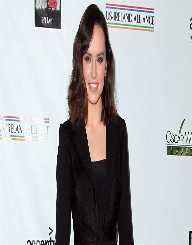 Daisy Ridley is a British actress who is best known for playing Rey, in Star Wars: The Force Awakens.

Daisy Ridley was born on in Westminster, London, England on 10 April 1992. She is the daughter of Louise Fawkner-Corbett and Chris Ridley. She is the grandniece of Arnold Ridley, the actor who played Private Godfrey in the British wartime comedy, Dad’s Army. Ridley has two sisters and two half-sisters. Her sisters are named, Poppy Sophia and Kika Rose, both are older than Ridley. Ridley loved film as a child and was a big fan of Mara Wilson, the child actress from Mrs. Doubtfire, Miracle on 34th Street and Matilda. Ridley attended the Tring Park School for the Performing Arts, to which she had won a scholarship. Upon graduation, at age eighteen Ridley went to study classical civilization at the University of London. She would not complete her studies and instead dropped out to pursue an acting career.

Some minor television roles marked Ridley's early career. She appeared in the British medical drama, Casualty, for her acting debut. Her next appearance was on the E4 comedy, Youngers. The same year she appeared in an episode of Channel 4’s Toast of London and the independent film, Lifesaver. Lifesaver was nominated for a BAFTA Award. The following year Ridley played Hannah Kennedy in two episodes of Silent Witness. She also appeared in an episode of the period drama Mr. Selfridge, which stars Jeremy Piven. Ridley’s feature-length film debut came in 2015 as she appeared in the horror thriller, Scrawl. The film is about the comic book drawings of two artists coming to live Ridley plays one of the come to life comic book characters.

Ridley had previously worked on the comedy film TheInbetweeners 2, but her scenes did not make the final cut for the film’s release. Ridley’s breakthrough came in 2014 when she was cast as the lead protagonist in the upcoming Star Wars trilogy. Ridley and the other key actors in the film were mostly unknowns. Ridley would play Rey an orphan with an unknown past who has extensive Force powers, but no formal Jedi training. The first movie in the scheduled trilogy, Star Wars: The Force Awakens, was released in 2015. The film was a huge box office smash and grossed over two billion dollars making it the highest grossing film of 2015 and one of the highest grossing in the history of film.

Ridley is set to star again in the second film in the new trilogy which will be released in 2017. The film will see Ridley appear alongside Mark Hamill who plays the iconic Luke Skywalker. She also appeared on Saturday Night Live in a sketch about the new Star Wars films. She has also been cast for an upcoming Peter Rabbit film.

Daisy Ridley suffers from endometriosis and has undergone laparoscopic surgery for the illness. The illness left her suffering from acne, and she was diagnosed with it at age fifteen.