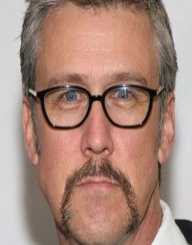 Alan Douglas Ruck was born 1st July 1956, in Cleveland, Ohio, in the United States. His father worked in pharmaceuticals, and his mother was a school teacher.

Ruck studied at Parma Senior High School, and after graduating, attended the University of Illinois. He graduated in 1979 with a Bachelor of Fine Arts in Drama.

Alan Ruck landed his first film role in 1983, when he debuted in Bad Boys, with Sean Penn. His second movie that year was Class.

In 1985, he debuted on Broadway, in a production of Biloxi Blues with Matthew Broderick.

In 1986, Ruck won one of the leading roles in Ferris Bueller’s Day Off, which was destined to become a cult classic.

Alan Ruck found himself with regular work, not only in films but also on television.

In 1984, Alan Ruck married Claudia Stefany. The couple had two children, a son, and a daughter, but they divorced in 2005.