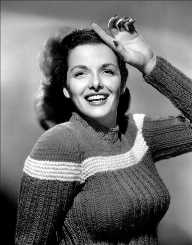 Born on June 21, 1921, Ernestine Jane Geraldine Russel was a famous American actress. She was one of the leading sex symbols in Hollywood movies during the 1940’s and 50’s. She is well known for her debut film The Outlaw in 1943. She gradually became an activist against abortion because she became a victim of improperly done abortion and this made her barren, and she had to adopt children and subsequently founded Waif.

Jane Russell was not only into acting as she intermittently made some music works. She did about 20 films throughout her career and was honoured with a star on the Hollywood Walk of Fame. Russell footprint and hands are also immortalised at the forecourt of Grauman Chinese Theatre.

Born in Bemidji, Minnesota, Jane Russel is the eldest of five children by parents Geraldine actress and Roy William Russell, an army officer. The family later moved to Southern California where she started a piano lesson. At the Van Nuys High School, she partook in stage production because of her interest in drama. Russell who was interested in fashion design ended up as a receptionist after graduating from High School because of her father’s death. She also did some modelling jobs for photographers before getting to the Max Reinhardt’s Theatrical Workshop upon request from her mum.

Jane Russel started her acting career after signing a seven-year contract with Howard Hughes in 1940. She, however, made her acting debut in the film The Outlaw in 1943. The film was initially scheduled to release in 1941 but delayed due to issues on censorship because of some nude scenes of her. She was involved in publicity of the film and made her well known then. Russell’s next movie was in Young Widow in 1946 where she played Joan Kenwood. Russell was mostly acclaimed with her sex appeal and fully figured nature. Her love for music made her venture into it during 1947.

In 1948, Jane Russel starred in The Paleface where she played Calamity Jane. Other films include Son of Polyface, 1952 and Gentlemen Prefer Blondes in 1953. Russell and Bob Waterfield formed Russ-Field Production and came out with the films Gentlemen Marry Brunettes, 1955, The King and Four Queens, 1956, Run for the Sun, 1956 and Fuzzy Pink Nightgown, 1957. She was not involved in other productions until 1964 when she starred in Fate Is the Hunter.

Jane Russel acted in four more films and brought her acting career to an end. When asked why she quit acting, she said she was growing old and had to bow out. Russell later in 1971 starred in Company which was her Broadway debut. She also appeared in someTV commercials within that time.

Russell later in 1954 formed the gospel quartet, Hollywood Christian Group with members Connie Haines, Beryl Davis and Della Russell. The group released their first coral Do Lord in 1954. The song sold about 2 million copies and made it to number 24 on the Billboard singles chart. Della Russell later left and was replaced by Rhonda Fleming. She went solo in 1957 and released a self-titled LP on MGM Records in 1959.

Jane Russel became pregnant out of wedlock with her high school lover, Bob Waterfield. She aborted the child which nearly caused her death. The result of the abortion was obvious; she couldn’t bear children anymore. Russell and Waterfield later got married in 1943 and divorced in 1968. Her second marriage was to John Calvin Peoples, an estate broker in 1974 whom she lived with until his death of heart attack in 1999. They adopted three children namely Tracey, Thomas, and Robert John.

All the remaining life Jane Russel stood against any form of abortion and said it should not be done under any circumstances. She formed Waif in 1955 which aimed to encourage adoption from other countries and place children with adoptive families. Russell died in home Santa Maria home on February 28, 2011. The cause of her death is attributed to a respiratory-related illness.