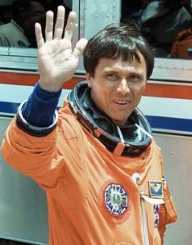 Franklin Diaz was born on April 5th, in 1950. He is a Costa Rican-American physicist, a mechanical engineer who was formerly working with NASA as an astronaut. In 1977, he changed his citizenship and became an American citizen. He currently works at Ad Astra Rocket Company as its president and CEO.

Diaz is normally admired for the vast experience he holds in the Space Shuttle missions he used to participate in. As a matter of fact, as of 2014, Franklin was the record holder of the most spaceflights. Due to his diligence in the field, he earned himself a spot at the NASA Astronaut Hall of Fame.

Franklin Diaz was born on April 5th, 1950. His place of birth was in San José, Costa Rica. He was the son of Ramón Ángel Chang Morales, his father. He was of Chinese descent. On the other hand, his mother was called María Eugenia Díaz Romero. She was of Costa Rican descent. Diaz was born in a family of six children.

Growing up, Diaz was interested in space right from the time he was young. As a result, this prompted him to relocate and moved to the United States. Upon completing his high school education, he left for the United States. This occurred in the 1960s. He went and resided with his uncle in Hartford, Connecticut. The language was a major issue in the United States, and therefore he had to enroll for classes again.

While in the U.S. his citizenship status became a huge barrier to taking advantage of educational opportunities. For example, Franklin Diaz was offered a scholarship to study at the University of Connecticut but could not take advantage of this since he was not an American citizen. He made an appeal which later allowed him to rely on the scholarship for a year. Diaz later graduated from the University of Connecticut with a mechanical engineering degree. Moments later, he enrolled at Massachusetts Institute of Technology where he took his master’s degree.

In 1977, the space program handled by NASA was back on track, and therefore they required astronaut candidates. Franklin Diaz had applied and was one among those picked in 1980. During this period, he was taking nuclear fusion classes.

Three years after taking his last trip to space, Franklin Diaz officially retired from NASA. This gave him an opportunity of establishing the Ad Astra Rocket Company. Franklin Diaz is an environmentalist, and he spends time pushing for environmental protection programs. In line with this, he featured in Odyssey 2050 The Movie where he motivated the young generation in protecting the environment.

Franklin Diaz tied the knot with Peggy Marguerite Doncaster. Together, they are proud parents of four children.