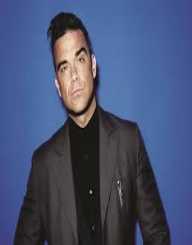 Robbie Williams was born on February 13th, 1974. He was born in Stoke-on-Trent, United Kingdom. His early career took off while playing with the boy band named Take That.

Robbie went to win the BRIT awards when his career was at its best. He is a singer, songwriter and a dancer. To this date, he is considered as a best-selling artist with over 70 million records under his name. While working solo, he broke records by winning 17 BRIT awards. This is a record that remains in his name.

Robbie Williams was born in 1974 to Peter and Janet Williams. His parents did not last long together as they divorced when he was three years old. Williams has a sister, Sally who is his stepsister. Williams was a performer right from his tender age. When schools closed, Williams spent time with Peter, his father. He enjoyed his father’s comic performances.

When he was 16 years, Robbie’s mother informed him about the auditions that were going on. A boy band was recruiting new members. Williams went for "Nothing Can Divide Us" rendition that won him a spot with the boy band.

While working with the boy band Take That, Robbie Williams helped his group in winning 6 number 1 singles and 3 number 1 albums. He earned recognition through this band, but he wanted to play an essential role in the music industry. Therefore, after five years of taking That, he left to pursue his solo career.

At the age of 21, Robbie Williams had gone solo, and his first song came after signing with Chrysalis/EMI. He sang “Freedom” from George Michael’s cover. His debut album while working solo was Life Through a Lens in 1997. This album received the mixed reception from his fan base.

Nonetheless, a single from the album called “Angels” sold over 800,000 copies. The song went to remain top 10 on the charts for more than three months. Subsequent albums were received positively by his audience including I've Been Expecting You - 1998, Escapology - 2002 and Reality Killed the Video Star - 2009. His eleventh studio album came in 2016 after releasing Heavy Entertainment Show.

Return to Take That

In 2010, Robbie Williams partnered with taking That band once more. This time they recorded Progress which was a highly successful album. He only spent a few months with the group before leaving again.

Williams’s solo career earned him nationwide popularity. In fact, it made him the best-selling British solo artist to this date. He was recorded more than 70 million records which have been sold globally.

As a result of the fame and recognition that Robbie Williams had gained not only in U.K. but throughout the entire world, he was honored in 2004. He was nominated for ‘Greatest Artist of the 1990s’. During the same year, he got his induction into U.K’s Hall of Fame.

Robbie Williams got married in 2010 to Ayda Field. Together they have two children Theodora and Charlton.