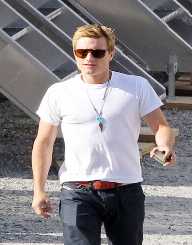 Josh Hutcherson is an actor and he was born in Union, Kentuckyin the East-central region of America on the 12th day of October 1992. His father worked as a specialist with the United States Environmental Protection Agency. He has a younger brother called Cannon and his mother was on the payroll of Delta Airlines.

While still a kid, he learned to swim with a cast on his arm after sustaining an arm injury during routines on the monkey bars. He always showed a desire to be a performer and by the time turned 9, his parents took him on an audition. He showed his talent and his drama coach recommended that his parents take him to Hollywood for a pilot season.

He started niching roles thereafter and Kristen Stewart, who was a co-star in the 2005 film titled Zathura: A Space Adventure, presented him with a turtle on his 13th birthday. He has made a progressive transition from the kid act to the mainstream of Hollywood, down the years.

Hutcherson landed his TV-movie role in 2002, along with a guest role on the TV show ER. Hegot a minor part in his first feature movie, American Splendor, in 2004. The same year, he featuredin the motion picture “The Polar Express”.

That same year, his vocalswere used for the character of Marki in “Howl’s Moving Castle”. This was an energetic fantasy presentation.

He showed up on the set of “Little Manhattan”, “Zathura” and “Screaming” in the year 2005. He played the role of Gabe in Little Manhattan and took a lead role in Zathura.

The comedy film “RV” was his next port of call in 2007. He was Jesse Aarons in the film “Bridge to Terabithia”, which was released in the same year. This film gave Josh good reviews and it was shot in New Zealand.

In the next following years, Hutcherson took up alternating roles in a number of movies. He was up again on set in the movie, Firehouse Dog as well as the science fiction adventure, Journey to the Center of the Earth. He was also a show in “Winged Creatures”, which was an indie drama.

He also picked up roles in theparasitemovie Cirque du Freak, as well as the 2010 movie, “The Kids Are All Right”. Here starred alongsideJulianne Moore and Annette Bening.

The big break for Josh was the 2012 series starter, Hunger Games. He played the role of Peeta Mellark and in the coming sequels, he snapped up the same role. The Peeta Mellark role was what earned him the CinemaCon Breakthrough Performer of the Year Award. He is also well-reviewed for parts played in RV, Little Manhattan, and Bridge to Terabithia. Other roles played by Josh in 2012 were in films like “The Forger”, “Journey 2” 7 Days in “Havana” and “The Mysterious Island”. He acted in “Epic” which was released in 2013 as well as the 2015 movie “Escobar: Paradise Lost”

Josh Hutcherson has his hands on movies like Detention, which was produced in 2011 and the 2012 film, “The Forger”. He was credited as an Executive producer in these movies.

He got reviews that were acclaimed for the movie “Detention” and also for “Journey 2: The Mysterious Island”. He got on as a Hollywood force to reckon with for the role in “The Hunger Games”. This marked his transition from a kid act to a performer of reckoning. The movie was a box office success and led Josh to a massive pedestal.

There have been eight nominations for Young Artist Award to date for Josh. He has been a winner four out of the eight times.

Hutcherson was a winner with ‘Polar Express’ and in the New Medium awards, he got the Outstanding Young Ensemble nod. He similarly received the Leading Young Actor award for his part in ‘Zathura’.

He also received six recommendations for his part in ‘The Kids Are All Right’ and was given the Alliance of Women Film Journalists Award for Best Ensemble Cast. He has said Jake Gyllenhaal is one of his biggest motivations.

Josh is likewise the youngest receiver of Vanguard Award, which goes to those who work for the ideals of LGBT persons. He similarly received Young Humanitarian Award at the 2015 ‘unite4: humanity‘ award proceedings.

Hutcherson lost two of his gay uncles to the AIDS scourge way before he was born. This was an added tonic for him to be passionate about gay rights.