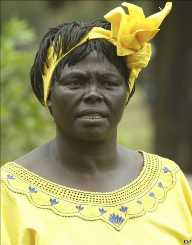 Wangari Maathai was a Kenyan environmental and political activist. Wangari is known to have been the first woman to earn a doctorate, and also the first black woman and environmentalist to win the Nobel Peace Prize. She received an honorary decoration from France, called Legion d’honneur.

Maathai is the founder of a movement, called The Green Belt Movement. Their primary purpose was to plant trees in forested areas, which were being deforested mainly for commercial purposes. More so, she became a political activist and was elected Member of Parliament and served as an assistant minister for Environmental, natural resources, and wildlife.

Wangari Muta Maathai was born on 1st April 1940. She was born in a village named Ihithe, in Nyeri district; located in Central Kenya. Wangari’s family was Kikuyu, a collective ethnic group in Kenya. When she was still young at around 1943, he father found some work in a white settlement a town called Nakuru. This forced the family to relocate with him but later returned in 1947, so that her siblings could be able to attain education in the Ihithe village.

Wangari started her education at the age of eight at Ihithe primary school. At eleven, she joined St. Cecilia Intermediate primary school in Nyeri, where she studied for four years, sharpening her skills in English. The school was also based on Catholicism and Wangari became a devoted member. She attained academic success while there, topping her class which earned her admission to a Catholic high school, Loreto High school Limuru.

At that time, the United States funded an education programme named `The Kennedy airlift’ which funded promising students to pursue their studies in the US. Wangari Maathai was one of the beneficiaries of this programme. In 1960, she received joined Scholastica College in Atchison Kansas to study biology. She graduated in 1964, and joined the University of Pittsburgh, pursuing a master’s degree in Biology.

While in Pittsburg, Wangari learned a bit about environmental activism. This is because there were various ecological activists at the time, who advocated for environmental restoration, most specifically from air pollution. Maathai returned to Kenya, whereby she was invited for a Job as a research assistant to a professor of zoology at the University of Nairobi.

However, she was not given the job due to some different issues. She landed a similar job after a few months in Nairobi University, Department of Veterinary science. She moved to Germany in 1969 to pursue her doctorate studies, In University of Giessen and Munich, but later completed them at University of Nairobi.

Wangari Maathai’s career began by working as a research assistant at the University of Nairobi, Veterinary Anatomy department. She worked under Professor Reinhold Hofmann who helped her join University of Giessen and Munich to pursue her doctorate. Wangari came back to Kenya after two years, and worked as an assistant lecturer, as she continued her studies in the institution.

Here, she attained a Ph.D. in veterinary Anatomy, becoming the first woman to achieve such. Because of her achievements, she became a senior lecturer in Anatomy, chaired the veterinary department and became the associate professor subsequently. At this high position, Wangari was now able to fight against gender bias and tribalism, of which she had been a victim earlier on.

Wangari also served in a couple of administrative positions. An example is; Kenya Red Cross director in 1971 and member of Kenya Association of women. At this time, she noticed environmental degradation problems in Nairobi. She founded Envirocare Ltd. Whose aim was to address the issue of environmental degradation, and to provide additional employment opportunities.

Its first project was at Karura Project but did not go through due to financial hitches. Wangari received recognition and was selected to UN conference on human settlement in 1976. Shortly after that, she introduced a tree planting project idea to National Council of women of Kenya (NCWK), which was accepted, planting seven trees in 1977.

1977 was quite a tough year in her personal life that drained her financially. However, during the same year, Wangari Maathai got a job with Economic Commission for Africa. In 1979, she contested for chairman at NCWK but landed the vice chairman spot. She, however, won the seat the following year and steered the organization to fame through environmental work until 1987.

Wangari tried to contest for a parliamentary seat but was ruled out and founded the Green Belt Movement, which combats issues like deforestation and water crises with enormous popularity, an inspiring formation of Pan-African Greenbelt Network. Wangari started political activism in the late eighties, advocating democracy, constitutional reforms among others which caused her to leave office due to resistance by the government. She also held a significant hunger strike in 1993, demanding some prisoners to be released, which was successful.

Maathai contested a parliamentary seat in 1997 but lost. However, her success in politics came in 2002 as a member of parliament and was also appointed the assistant Environmental minister. In 2005, Wangari Maathai became the president of African Union in economic social and cultural council and a goodwill ambassador The Congo basin protection initiative. She was unsuccessful in her political endeavors in 2007.

Wangari Maathai got married in May 1969 to Mwangi Maathai. Mwangi was a fellow beneficiary of the Africa-US education sponsorship project and later became a member of parliament. However, their marriage ended in 1977 after a legal divorce. It is alleged that Mwangi found her `untamed,’ `uncontrollable’ or too `strong-minded’ as she was too focused on work and useful development which was hardly expected of an African woman at the time.

Wangari Maathai died on December 25, 2011, as a result of ovarian cancer. She was honored with a Google Doole on 1st April 2013, to commemorate her.