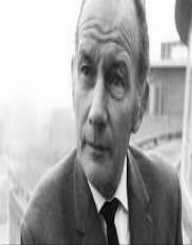 James Cameron was a British journalist and author.

Mark James Walter Cameron was born on June 17, 1911, in the district of Battersea, London. His father was William Ernest Cameron, a barrister, and novelist. His mother was Margaret Douglas Robertson Cameron, a homemaker. Both of his parents were of Scottish origins.

At the age of 15, James Cameron began working as a clerk for a newspaper in Manchester. He later joined D. C. Thompson, a publishing group in Scotland. His job there was to create sensationalist drawings. In 1935, he became a clerk for the Weekly News. He then joined the staff of the tabloid newspaper Daily Express. After World War II, he reported on the nuclear testing at Bikini Atoll.  He soon became one of the co-founders of the pacifist organization Campaign for Nuclear Disarmament.

In 1950, Cameron started working for the Picture Post. During his time there, he covered the brutal acts committed by South Korean soldiers in the concentration camp in Pusan. The article caused considerable controversy in the British press. The editor of the Picture Post lost his job, and the story was ultimately censored. Because of this, Cameron resigned his positions.

From 1952 to 1960, he worked for the News Chronicle. He traveled and reported in countries such as Kenya, Vietnam, Albania, Israel, South Africa, and China. He published several books describing his experiences in these countries. They included Touch of the Sun, Mandarin Red, The African Revolution, and others. In 1965, he visited Vietnam right after the bombings. The articles he wrote about this were published in The New York Times and The Evening Standard of London.

James Cameron began working as a TV journalist for the BBC. He wrote pieces for programs such as This Week, Camera in Action, and One Pair of Eyes. He worked on documentaries such as The Spanish Civil War and Eyewitness in Vietnam. He wrote and presented his series, called Cameron Country. He wrote two TV plays, titled The Pump and The Sound of the Guns. He wrote the autobiographical books Point of Departure and An Indian Summer.

James Cameron's coverage of the Korean War won the Missouri Pictures of the Year International Award. His play The Pump won the Prix Italia award. In 1979, he received the title of Commander of the Most Excellent Order of the British Empire.

James Cameron's first wife was named Eleanor Murray. She died in 1939 while giving birth to their daughter, Elma. He then married a woman named Elizabeth O’Connor. They had a son named Fergus. He also adopted Desmond, her son from her previous marriage. They ended up getting a divorce. In 1971, he married a woman named Moneesha Sarkar.

James Cameron suffered a stroke in his sleep and passed away on January 26, 1985. He was 73 years old.