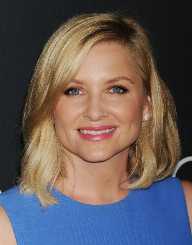 Jessica Capshaw is an American TV actress most famous for her role as Jamie Stringer on the TV show The Practice. She also starred in Grey’s Anatomy as Arizona Robbin – a lesbian doctor.

Jessica Capshaw was born on August 9, 1976. Her birthplace is Columbia, Missouri and her star sign is Leo. Her father Robert is a sales manager and her mother Kate is an actress. Jessica got her acting talents from her mother. Her parents divorced when Jessica was only three years of age. Her custody went to her mother who took her to the sets of her films.

Jessica’s mother Kate became a famous actress, and while acting for the film The Temple of Doom, she fell in love with director Steven Spielberg. They married in 1991. Through this marriage, Jessica received five half-siblings and a step-brother who was adopted by Spielberg. With both her mother and step-father in the film industry, it was natural for young Jessica to become interested in it. Her parents weren’t very thrilled about it, but she dived into the acting industry with them to guide her along the way.

Jessica Capshaw attended the Harvard-Westlake School. She then enrolled at the Brown University in Rhode Island and graduated in 1998 with a B.A. in English. For her acting career, she took lessons at the Royal Academy of Dramatic Arts, London.

Jessica Capshaw's career didn’t start as an actress. Instead, she interned under her stepfather to understand the film industry better. They worked together on the film Schindler’s List – which went on to win an  Academy Award.

Finally, Jessica started acting by appearing in small roles in a few movies till 1999 when she was cast in her first significant role. She appeared as Aunt Jordan in the TV series Odd Man Out. She also got a support role in the Tom Cruise starrer Minority Report. She received more recognition and fame by playing Jamie Stinger in the drama The Practice. She was part of the show till 2004 after which she appeared in The L Word.

2009 was an excellent year for Jessica Capshaw as she saw her dream come true. She had always wanted to be a part of Grey’s Anatomy, and in 2009, she was selected to play the role of Dr. Arizona Robbins – a lesbian. This also made her extremely popular among the gay and lesbian communities.

Capshaw is straight in real life. She was initially contracted to appear in only three episodes. However, her chemistry with her lesbian partner on the show was so well received that she became a recurring character for the remainder of the fifth season. In the sixth season of Grey’s Anatomy, her role became a series regular.

Jessica Capshaw is married to Christopher Gavigan who is an entrepreneur. They tied the knot in 2004. They have four children – a son named Luke and three daughters named Eve, Poppy and Josephine.