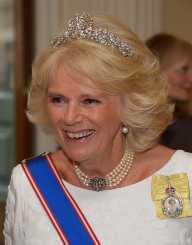 The Duchess of Cornwall was born on the 17 July 1947 in London, England. Her parents were Bruce and Rosalind Shand. She had a brother Mark Shand (1951-2014) who was a travel writer and conservationist, and she has a sister Annabel Elliot (1949) an interior designer and antique dealer.

For her early education, Camilla Parker Bowles attended school at Dumbrells in Ditchling, a village in the Lewes District of East Sussex. At age ten, she went to Queens Gate School in South Kensington London. After obtaining her O-levels in 1964, she went to Mon Fertile, a finishing school in Switzerland. Camilla then studied at the University of London Institute in Paris for six months.

After she finished her education, Camilla initially worked as a secretary. Later she became interested in interior decorating and spent twelve months working at Sibyl Colefax & John Fowler in London.

Camilla had received an inheritance of five hundred thousand pounds from her mother’s family and did not need to work to support herself.

The public became aware of Camilla when Prince Charles started dating her in the 1970s, and there was speculation about whether or not she would marry her. Later, the spotlight was shone on her again when the Princess of Wales raised her concerns about her relationship with her husband.

Camilla had dated Andrew Parker Bowles in the late 1960s. After they had broken up, he dated Princess Anne. They started doing out again after she had ended her relationship with Prince Charles and in 1973, they got married. 1973. The couple had two children Laura and Thomas. She lived with her husband at Bolehyde Manor a Grade II listed Georgian house in Allington, North Wiltshire. Camilla was known for her love of the outdoors, horses and hunting as well as her lively, exuberant personality.

She remained friends with Prince Charles, and they moved in the same social circles. Prince Charles was godfather to Camilla’s first child. When Prince Charles married Diana Spencer in 1981, Camilla attended the wedding with her husband. By the early 1990s, press speculation about the relationship between Camilla and Prince Charles had reached a frenzy, and this led to the infamous Camillagate tape episode in 1993. In 1995, Camila divorced Parker Bowles. Charles and Diana, who had been estranged for some time, divorced in 1997.

The British public initially found it challenging to accept Camilla as the Prince’s potential partner and this became more complicated when the Diana, the Princess of Wales was tragically killed in a motor accident in Paris, France in 1997. On the advice of the Queen, Camilla did not attend a 2007 the memorial service for the princess even though she had been invited by Prince William and Prince Harry.

Prince Charles appeared in public with Camilla as his partner at the birthday celebration of her sister Annabelle at the Ritz Hotel in London in 1999. The same year, Prince William requested that Camilla is invited on a Mediterranean cruise with Princes Charles and his sons. Camilla first official function with the royal family was attending the Golden Jubilee celebrations in 2002. In 2005; there was an announcement that the couple was engaged to be married.

They had a civil ceremony at Windsor Guildhall and then the Archbishop of Canterbury, Rowan Williams, delivered a blessing at the chapel in Windsor Castle. Camilla’s ex-husband Andrew Parker-Bowles attended the wedding accompanied by his second wife, Rosemary Pitman.

Upon her marriage, Camilla became the Duchess of Cornwall. Her role as a member of the royal family means that she supports the Prince of Wales in his official duties as well as being involved with a large number of organizations, traveling around the UK and the world on official visits.

Camilla’s ancestry includes Dutch, Scottish and French descent but she is mostly English. Her great-great-grandmother Alice Keppel (1868-1947) was the long-time mistress King Edward VII. Her ancestry includes the House of Stuart, the French Bourbons and King Robert III of Scotland. She is also a direct descendant of William the Conqueror. Prince Charles and Camilla are distant cousins via Henry Cavendish, the 2nd Duke of Newcastle.

Camilla lost her only brother, the famous travel writer, and conservationist, Mark Shand when he died in New York City in 2014. Her son Tom Parker Bowles (b.1974) is a food critic and writer who has published five cookbooks. He is married to Sara Buys, and the couple has two children, Lola and Freddy. Daughter Laura (b.1978) is married to Harry Lopes, and they have three children Eliza, Louis, and Gus. She is the stepmother to the future King of England, Prince William and his brother Prince Harry.

Camilla is close to her only sister Annabelle who helped her through the difficult years when the press were pursuing her and making it difficult for her to see Prince Charles.

On the advice of the Queen, Camilla did not attend a 2007 the memorial service for the princess even though she had been invited by Prince William and Prince Harry.

The Duchess is a member of the Church of England.

Areas the Duchess has been actively involved with include women’s issues related to rape and abuse. Camilla has also being awarded for her work involved involving osteoporosis. Both her maternal grandmother and her mother suffered from the condition. Awards that she has received for her involvement in promoting awareness of osteoporosis include a Kohn Award (2007) from the Royal Society and the Ethel LeFrak award (2005). There is also The Duchess of Cornwall Award which the National Osteoporosis Society award in recognition of work done in the field.

Camilla started hunting with her grandfather and father at an early age. She is also a talented equestrienne, enjoys painting and is a keen gardener.