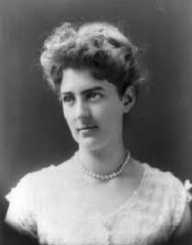 Frances Folsom Cleveland Preston was born on July 21, 1864, in Buffalo, New York in the United States of America. She was born to Oscar Folsom, a lawyer, and Emma Harmon. Grover met Frances when she was still a baby, and he was twenty seven years old. He was friends with her father. Grover developed an interest in Frances while a baby and even when she was growing up. In 1875, Oscar died, and Grover became the administrator of his estate.

Frances Cleveland attended Central High School and Medina High School in New York, United States of America. She later went to Wells College, Aurora in New York. Grover developed romantic feelings for Frances while she was in college. In 1885, Grover proposed to her via a letter and she accepted. The two announced their engagement five days before their wedding. In 1911, Cleveland Hall was constructed at Wells College to honour Frances.

In 1886, Frances Cleveland got married to President Grover Cleveland at the White House. At the time of the wedding, Frances was twenty one years old while Grover was forty nine years old. Frances became the only First Lady to be married in the White House. The wedding was performed by Reverend Byron Sutherland and Reverend William Cleveland. William was President Grover’s brother. Their honeymoon took place at Deer Park in the Cumberland Mountains of Western Maryland. They enjoyed their honeymoon for five days.

In 1908, Frances lost her husband, and she continued living in Princeton in New Jersey. In 1913, she got married to Thomas J. Preston, Jr. who was a professor of archaeology. She became the first widow of a President to remarry. In 1914, she moved back with her children to the United States from Switzerland after the First World War started.

In 1918, Frances Cleveland became the director of the Speakers Bureau and the Committee on Patriotism through Education in the National Security League. In 1919, she resigned forcefully due to her pro-fascist views. She later became the President of the New Jersey Association Opposed to Woman’s Suffrage. She was also the President of the Princeton Chapter.

Frances Cleveland died on October 29, 1947, in her sleep at her son’s house in Baltimore. She died at the age of eighty three. Her remains were buried in Princeton Cemetery next to her first husband, President Grover Cleveland.