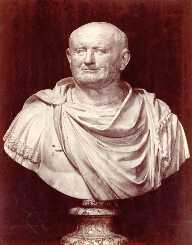 Around 39, Vespasian served in the Roman military for about three years. He did not have an especially impressive military career. During this time, Caligula was the emperor of Rome.

In 41, there was a new emperor in Rome, Claudius. Under his rule, Vespasian was appointed to be a legate of Legio II Augusta. Also while Claudius was ruling Rome, Vespasian continued his military service. Because of this, he was also appointed to be the consul of Britain. Sadly, Claudius died in 54. With his death, Vespasian left his job, as Claudius’s widow did not like him.

After Claudius, Nero became the new emperor of Rome in 54. However, it was not until 63 that Vespasian worked seriously in his service. It was in this year that he worked as the proconsul in Africa. This was not a great job for him personally, and the people who he worked with also hated him. Three years later, Vespasian was fighting in the Roman military in Judea. These missions were successful. Sadly, at 68, Nero killed himself; his death plunged Rome into civil war and caused personal trouble for Vespasian, as he had lost job security.

The Roman Civil War, also known as The Year of Four Emperors was a rough time for Roman citizens.  Right after Nero, Galba became the emperor, but he died in January 69. Later on that month, Otho became emperor, but he only lasted until April before dying. The next Emperor was not appointed until July: Aulus Vitellius. He died in December 69. Finally, later on, that same month, Vespasian was appointed as the Emperor of Rome (even though he was declared the emperor of Rome in July in some other areas of the empire).

It was the Roman Senate who had appointed Vespasian as the new Roman Emperor in December 69. However, he was living in Egypt at the time he was appointed and did not actually move back to Rome until October 70.

During the civil war, even though it had only lasted about a year, Rome’s economy was wrecked. During his time as emperor, Vespasian did all that he could to repair the economy. To do this, he established several work projects. Most of these projects were geared towards rebuilding some of the buildings damaged in the war, as well as making new buildings. One of the famous buildings that were built during this time was the Colosseum. To do this, he, of course, had to raise taxes, which people didn’t like. However, for the most part, the Roman people seemed to understand that raising taxes had to be done.

Vespasian also worked towards improving the Roman army. He built up several small armies to replace some of the bigger armies. This helped to keep the peace in the middle east and near Asia, where Rome often got into trouble.

After Vespasian’s (peaceful) death, his son, Titus Flavius Vespasianus (who was later known as Titus Vespasianus Augustus), became the next Emperor of Rome.

Vespasian was first married to Flavia Domitilla. Together, this couple had three children: Domitilla, Titus Flavius Fomitanus, and Titus Flavius Vespasianus. Sadly, the marriage ended in 75 when Flavia Domitilla died. After her death, Vespasian was romantically involved with Antonia Caenis. The two acted as though they were married, even though they were never legally married. This couple stayed together until Vespasian’s death.

Vespasian died on June 23, 79, in Rieti, Italy. The cause of his death was illness and general poor health. He was 69 years old when he passed away.