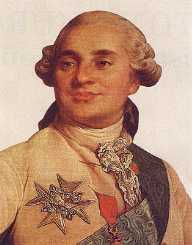 Louis Auguste de France, better known as King Louis XVI, was born on August 23, 1754, in Versailles, France. His father was the Dauphin of France, who was also named Louis. Although, his father would not become king. His mother was Marie Josephe of Saxony. His grandfather was King Louis XV.

As a child, Louis XVI was educated as well. He had private tutors who taught him some subjects in the humanities and sciences, including theology, Latin, history, astronomy, and various languages. He also often participated in sports, like hunting.

Louis’s life was filled with tragedy, even when he was young. He had an older brother, Louis Duc de Bourgogne, who was going to be the next king of France, but he died when he was only nine years old. Soon after, Louis’s father also died. At this time, Louis’s grandfather was still the King of France, but Louis was the oldest male heir to the king, making him the new Dauphin of France when he was only eleven years old. Soon after this, his mother also died, leaving him orphaned.

After the death of his father and brother, Louis XVI began his training, as he was soon to become the new king of France. Since he had been tutored in various subjects already, he gained new studies, which were meant to teach him how to reign. These included how to speak diplomatically and how to make political decisions. However, these lessons did not pay off, as Louis would become known to the French people as being a highly indecisive and shy king.

King Louis XV died on May 10, 1774, making Louis XVI the new king of France. At the time, he was only 20 years old, and more or less still experienced with politics. Still, he wanted to do his best as a king. However, he inherited an enormous amount of debt, and many of the people of France were looking towards an end to the French monarchy in general. All in all, the odds of him succeeding as a king were stacked against him.

As king, Louis XVI tried to appease as many of the French people as he could. He advocated for religious tolerance (at least between the different Christian sects). He allowed Protestants to become citizens.

Another thing Louis XVI was focused on during his reign was foreign policy. Around this time, the American colonies were facing problems with Britain. Around this time, France also were against Britain, so France helped the colonies to fight their war with Britain so they could become independent. While this was a noble enough idea, it only pushed France further into debt. The French people were not happy about this. Instead of doing something about it, Louis XVI decided not to do much of anything, as he feared that any decision he made would push the country into further trouble.

Louis XVI’s lack of decision making did not fare well for him. Instead of running the government, as he should have been, he spent a bulk of his time working on his hobbies instead. Because he was not doing anything to get France out of debt, the country’s economy suffered.

In the late 1780’s, the people of France had enough with Louis XVI’s lollygagging. Around this time, the French National Assembly formed. This group worked towards making a new French constitution, which Louis XVI was none too happy about. Louis XVI tried to disband the Assembly, but his efforts fail. Soon, a National Guard also formed to work against Louis XVI.

Soon after, in the midst of 1989, riots grew in the streets. Some of the biggest riots took place in Paris. To try to appease the masses, Louis XVI promised reforms, but he failed to grow through with them, which only angered the French people more. Because of the rising anger towards Louis XVI and the royal family, they had to move to hide from the public.

In 1792, Louis XVI entered into war with Austria. Later in the same year, the Legislative Assembly formed the First French Republic. Soon after, they charged the entire royal family with treason, because of their anti-revolutionist actions. Louis XVI was quickly found guilty of his crime.

Louis XVI married his cousin, Marie Antoinette, in 1770. At the time, Louis was only 15 and Marie was only 14. It was not until eight years into their marriage that the couple had their first child. The couple would eventually go on to have four children together: Louis Charles, Louis Joseph, Marie Therese, and Sophie Beatrix. Marie Therese was the only one of their children to live into adulthood.

Louis XVI was executed by guillotine on January 21, 1793. He was only 38 years old when he died. He would be the last French King to die, as the French monarchy was basically destroyed with his death during the French Revolution.