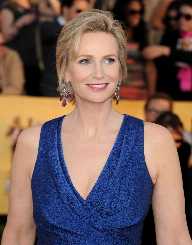 Jane Lynch was born on July 14, 1960. She is an actress and has featured in many TV sitcoms and dramas, which include Glee and Two and a Half Me. Her Glee role as Sue Sylvester has enabled her to win numerous awards and nominations.

Jane Lynch was born on July 14, 1960, in Evergreen Park, Illinois. Frank Lynch, a banker, was her father who married her mother, Eileen, a homemaker and secretary. Her interest in acting came after she acted as a candle in a play during her third grade. She also was a singer as she participated in her high school’s choir.

Jane Lynch studied at Thornridge High School and later went to Illinois State University for her bachelor’s degree. She pursued in perfecting her interest in Cornell University, where she took the Master of Fine Arts in theatre.

In Chicago, Jane Lynch got involved with Steppenwolf Theatre Company and Second City Touring Company for almost fifteen years. Her debut theatrical play was The Real Live Brady Bunch. In 1988, her debut film was Vice Versa which a comedy was. In 1993, she acted with Harrison Ford in the film, The Fugitive.

Jane took up some commercial roles, which enabled her to get a role in the year 2000 film, Best in Show thanks to Christopher Guest, who used to be her commercial show director. Her debut TV series was MDs, which she featured in 2002. In the year 2003, she made an appearance in A Mighty Wind that was a folk music film. In 2005, she took the leading role in The 40-Year-Old Virgin. In 2006, she took a role in For Your Consideration.

Afterwards, Jane Lynch took many supporting roles in many films like Alvin & the Chipmunks, Another Cinderella Story and Talladega Nights: The Ballad of Ricky Bobby. She also appeared in television shows like Boston Legal, Desperate Housewives, Gilmore Girls, Dawson's Creek, Judging Amy, and The X Files among others.

In 2009, Jane regularly appeared in the series, Glee, thus won many awards and nominations for her role. Lynch also took a role in Two and a Half Men. In 2010, Lynch was the host of Saturday Night Live. In 2013, Lynch hosted the Hollywood Game Night. In 2013, she co-hosted the New Year's Eve with Carson Daly.

Jane Lynch has won the Primetime Emmy Award for Outstanding Supporting Actress in a Comedy Series award in 2010, 2011, 2014, and 2015. In 2011, she won the Golden Globe Award. She has won the Screen Actors Guild Award for the years 2009 and 2010. Lynch has received other nominations and awards too.

Due to nerve damage, Jane Lynch was diagnosed with partial deafness in her right ear.

Jane Lynch married Lara Embry in 2010, and she has been a lesbian without hiding from the public. They divorced in 2014.