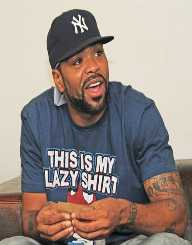 Method Man was born on April 1, 1971. He is an American hip-hopper, record producer, and actor. His real name is Clifford Smith.

Method Man was born Clifford Smith on April 1, 1971, in Long Island, Hempstead, in New York. He was raised in two different homes since his parents were separated. His father introduced him to poetry and music. As a teenager, he took up part-time and odd jobs to sustain himself. He also involved himself in drug dealing.

Method Man was a member of the ‘Wu-Tang Clan’ which was a hip-hop group. In 1993, the group released the album ‘Enter the Wu-Tang: 36 Chambers’ which included his solo song. In 1994, he released his debut solo album ‘Tical’ which was a hit and a commercial success. In 1995, he came out with the duet ‘I’ll Be There for You/You’re All I Need to Get By’ which he sang with Mary J. Blige. The duet won a Grammy Award. In 1995, he released the song ‘How High’ in collaboration with American rapper Redman which was a hit. In 1995, he created the single ‘The Riddler’ which appeared in four different Billboard Charts.

Method Man also appeared in films such as ‘How High’ and ‘The Wire’ among others. In 2004, he released his third studio album ‘Tical 0: The Prequel’. In the same year, he appeared in the movies ‘My Baby’s Daddy,’ ‘Garden State,’ ‘Scary Movie 3’ and ‘Soul Plane’. In 2005, he appeared in the film ‘Venom’. The following year he released his fourth studio album ‘4:21.....The Day After’ which did well on the music charts.  He starred in the series ‘CSI: Crime Scene Investigation’.

In 1996, Method Man received a Grammy Award for Best Rap Performance by a Duo or Group for ‘I’ll be There for You/ You’re All I Need to Get By’.

In 2001, Method Man married Tamika Smith with whom he has three children. He has an estimated net worth of $14 million. He is currently forty six years old.