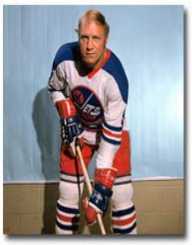 Bobby Hull is a former ice hockey player, his nickname is the Golden Jet.

Robert Marvin Hull Jr. was born in Pointe Anne, Ontario on 3rd of January 1939. His father Robert Hull Sr. was a foreman in a cement plant, his mother Robert “Bobby” was the oldest of eleven children. Bobby received his first pair of skates when he was three years old, and by his teenage years, he was in the local amateur ice hockey league with his father. Soon he was enrolled in junior hockey team Galt Black Hawks

After a slow start, Bobby Hull wore numbers sixteen and seven, before settling for number nine. Black Hawks won their first Stanley Cup after twenty- three years with Bobby in 1961. Bobby scored fifty-eight goals in the 68-69 season and in total he had managed to score more than fifty goals for five seasons.

In 1972, Bobby Hull joined World Hockey Association (WHA), a competitor of NHL. Thinking that WHA was joking about his pay, and feuding with Black Hawk’s management, Bobby Hull signed a $1 million contract to be player-coach with the Winnipeg Jets that year. Bobby led the Jets to three Avco Cup championships and claiming two MVP awards in the seven years with the association.

When WHA folded, he returned to NHL in 1979. Bobby Hull returned from retirement to help the Winnipeg Jets’ financial issues and later was traded to Hartford Whalers in 1980. Bobby Hull tried with New York Rangers in 1981; he was forty. As he did not make the cut with the Rangers, Bobby Hall announced his retirement from hockey to look after his injured partner.

Bobby Hull won Lady Byng Trophy for sportsmanship in NHL in 1965, and the Hart Trophy as MVP twice. He also has three Art Ross Trophies to his name. Bobby was made an Officer of the Order of Canada in 1978. In 1983, Bobby Hull was inducted into the Hockey Hall of Fame.

Bobby Hull used to like to curve the blades of his hockey stick, which was known as banana blades. The curve made the puck’s trajectory inconsistent, and was dangerous to goalkeepers who did not wear masks. After discussion, the rule limited the curvature to be between one-half to ¾ of an inch. In 1970, it was set at one-half-inch, after Bobby Hull threatened to sit out.

Bobby Hull is the ambassador of Blackhawks (now one word) since 2008. He also owns a cattle range in Canada, and occasionally commented as an elder statesman of the game.

Bobby Hull married Joanne Mckay, a former figure skater in 1960. She initiated divorce proceedings in 1970, but the pair rekindled. After another domestic violence incident, Joanne filed for divorce, finalizing in 1980. Together they had five children, Bobby Jr., Blake, Brett, Bart, and Michelle. His daughter Michelle is a former figure skater, and an attorney specializing in domestic violence.

He later married Deborah in 1984, but she later accused him of assault. Bobby Hull was arrested for hitting the police officer who tried to intervene. Bobby retired in 1981 to look after Claudia Allen, who was injured in an accident, the pair later broke up in 1983. Bobby Hull has a daughter from that relationship.

Bobby’s son Brett Hull is a hockey player; together, they are the only father and son tandem to win the Hart Trophy and the Lady Byng Trophy.