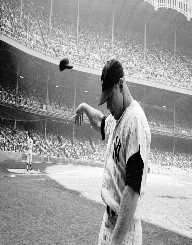 Best known as The Commerce Comet and The Mick, Mickey Charles Mantle was an American baseball player. Born on October 20, 1931, he is regarded by many pundits as the greatest offensive threat center fielder in the history of baseball. Mantle is also regarded as the greatest switch hitter and one of the best sluggers in the history of the game. He played as a center fielder and first baseman for the Major League Baseball (MLB) club New York Yankees where he spent his entire career, playing from 1951 to 1968.

In his nearly two-decade career, he achieved the highest OPS+ made by any center fielder and by the time of his retirement attained the highest stolen base percentage in baseball history. Mickey Mantle won the MVP on several occasions and selected an All-Star almost throughout his career.

He had several other personal accomplishments. In 1964, he was inducted into the Oklahoma Hall of Fame and the National Baseball Hall of Fame in 1974. In 1999, he was electedinto the Major League Baseball All-Century Team.

Mickey Mantle was born to the son of Lovell (née Richardson) Mantle and Elvin Charles "Mutt" Mantle on October 20, 1931, in Spavivaw, Oklahoma. His father was a lead miner. Mantle was named after Mickey Cochrane, the Hall of Fame catcher. At the age of four Mantle moved with the family to Commerce, Oklahoma. Growing up, he practiced baseball with his father and grandfather and rooted for the St. Louis Cardinal.

Mickey Mantle attended Commerce High School, where he played basketball, baseball, and football. With football, he played halfback and received a football scholarship from the Oklahoma Sooners. Mickey Mantle was severely injured when kicked in the left shin during football practice in his first year and developed osteomyelitis in the left ankle. This nearly ended his entire athletic career but for the quick intervention that prevented the infection from spreading. His parents rushed him to the Oklahoma Children’s Hospital where he was injected with a penicill in to curtail the infection. He graduated from high school in 1949. Mickey Mantle lost his father in 1952 to Hodgkin's disease.

Mickey Charles Mantle started his baseball career with the Baxter Springs Whiz Kids, a semi-profession team in Kansas. In 1949, he was signed by Tom Greenwade on a $1,500 signing bonus and $140 monthly payment. Hethen played shortstop in the Kansas-Oklahoma-Missouri League for the Yankees’ Class-D Independent Yankees. Is first professional home run was on June 30, 1949, at Shulthis Stadium. He hit .313 during his career with Independence Yankees.

Prior to the 1951 season of the MLB, Mickey Charles Mantle has the chance to train with the Yankees at the instructional camp. He put up an impressive performance; therefore, Yankees manager Casey Stengel promoted him to the major league as a right fielder. This came with a salary increase of$7,500 (equivalent to $71,000 in 2017).

He was assigned the No. 6 with much expectation from him. Mickey Mantle had a tough start, and after some slumps, he was sent to the Kansas City Blues, Yankees top farm team. Still underperforming, he nearly gave up, but his father encouraged him to continue, and that was just what mantle needed to get back to his feet. His stay at Kansas City saw him hit .361 with 11 homers and 50 RBIs. With that performance, Yankees recalled him and was given the No. 7 uniform. In 93 games to the side, he hit .267 with 13 home runs and 65 RBI.

During the 1952 season, Mickey Charles Mantle replaced DiMaggio as a center fielder. DiMaggio had retired the previous year. He would play that full position time until he moved to the left field in 1965. He became Yankees hitting starbase percentage above .400 and a slugging percentage above .600 during his first complete World Series in 1952. The rest is history as his performance kept improving though mostly hit by injuries. He won several titles and achieved a lot as a baseball player.

Mickey Mantle made an all-time World Series record with 18 home runs, 42 runs scored and 40 runs batted in (RBI). He won the MVP on several occasions. With his outstanding performance, he became the highest-paid player in baseball after signing a $75,000 contract with Yankees on January 16, 1961.

Mickey Charles Mantle retired from the game on March 1, 1969. His farewell speech was on "Mickey Mantle Day," June 8, 1969, in Yankee Stadium.

Mickey Charles Mantle had his own bouts of recurring injuries since he started playing baseball through to high school until retirement. His 18-year professional career was full of various degrees of injuries and applying thick wraps on both knees became a pre-match routine.

In 1969, Mickey Charles Mantle joined Tony Kubek and Curt Gowdy on NBC as a part-time color commentator for baseball coverage. He also worked as a part-time TV commentator for the Montreal Expos in 1972. He also made some investments of which some turned out to be bad. In 1988 he opened the Mickey Mantle’s Restaurant and Sports Bar in New York at 42 Central Park South (59th Street), which was very popular.