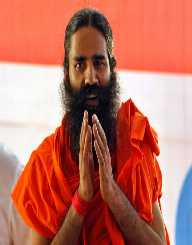 Hindu Swami Ramdev, known worldwide as Baba Ramdev, was born in Alipur in the Mahendragarh District in Haryana State, India on the 25 December 1965. His birth name was Ramkishen Yadav. His parents were Ram Niwas Yadav and Gulabo Devi, both of whom were local farmers.

Ramdev was educated up to Standard 8 in the school system before switching to studying yoga and Sanskrit at a gurukul in Khanpur. He eventually became a Sanyasi and was given the title Swami Ramdev. He was initiated into the order by Swami Shankardevji Maharaj after he had committed many years to the study of ancient Indian scriptures, meditation, self-discipline Yoga and Ayurvedic medicine

It was while Ramdev was living in Kalwa Gurukul in the Jind District, Haryana that he began giving free yoga training.

In the early 2000s, he began appearing Aastha Television’s morning Yoga show. His show quickly popularity and he built up a huge following.

During the first decade of the 21 century, Ramdev ‘s fame grew as he became the face of yoga both in India and internationally. His popularity in India was followed up by international success as he began touring internationally and gained a growing following in the USA, Japan and Britain, Nepal, Canada and Australia. Ramdev is credited with popularising yoga worldwide with his mass yoga camps, media outlets, products, and activism.

Ramdev is a founder of the Divya Yoga Mandir Trust (1995) which focuses on promoting yoga. He also founded the Patanjali Yogpeeth Trust in Haridwar which researches the healing powers and benefits of both Ayurveda and Yoga. The trust provides free services to visitors. His Patanjali Yogpeeth Institute in Haridwar also manufacturers Ayurvedic medicines, offers treatments and residential accommodation. There are now two centers in India and others in the U.S.A., UK, Nepal, Mauritius, and Canada.

Initial partners in the setting up of the Divya Yoga Mandir Trust were Acharya Karmaveer (Yoga) and Acharya Balkrishna, a physician with a degree in Ayurvedic medicine.

Ramdev delivered a lecture on alleviating poverty at the UN in 2006. Kofi Annan had invited him.

He founded Patanjali Ayurved in 2006. Initially, he was against advertising, but by the end of 2015 he changed his point of view and began using traditional advertising and marketing methods with wide-ranging success.

As a teacher, Ramdev has also taught several aspects of traditional Indian scriptures. He has also assisted in establishing gurukuls in Kishangarh, Ghasera, and Mahendragarh. His educational show is broadcast on the religious television channel Aastha as well as other networks including India TV and Sahara One.

Writer Priyanka Pathak-Narain has published a biography of Ramdev. It is entitled Godman to Tycoon: The Untold Story of Baba Ramdev (2017). Another publication about Ramdev is The Life and Times of Baba Ramdev by Ashok Raj.

Ramdev’s statement that AIDS patients can find relief from suffering using Yoga and Ayurvedic medicine caused a controversy. A website promoting his products claimed that some AIDS patients experienced improvements after practicing yoga and some journalists misinterpreted this as saying he had claimed to have a cure for AIDS. The Indian Union Health Ministry subsequently sent a cease order. Ramdev’s response was that he was misquoted.

Webindia reported in September 2017 that Karamveer, one of the original co-founders of Divya Yoga Mandir and Patanjali Yoga Peeth had accused Ramdev of nepotism in both organizations. This comment was a reaction to Ramdev’s views expressing doubts about former Law Minister Shanti Bhushan and his advocate son Prashant Bhushan both being members of the Joint Drafting Committee for the Lokpal Bill. Ramdev later blamed the media for misrepresenting what he had initially said

The Kalinga Institute of Industrial Technology in Bhubaneswar awarded Ramdev an honorary doctorate in 2007. In 2011 he was presented with the Sri Chandrasekharendra Saraswati National Eminence Award by Maharashtra Governor Kateekal Sankaranarayanan.