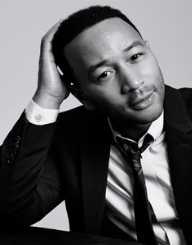 John Legend (born John Stephens) is a piano prodigy, singer, songwriter and an actor. Hailed by many as the savior of soul music in the age of rap, John’s music has a positive and fresh feeling. His smooth and soulful songs have brought him great fame in the recent years.

He has collaborated successfully with artists like Kanye West, Alicia Keys, and Janet Jackson. As a solo artist, his song ‘All of Me’ reached the number one spot on the US Billboard Hot 100 in 2014.

John Legend was born on December 28, 1978, to Phyllis Elaine and Ronald Stephens in Springfield, Ohio. He has three other siblings. His grandparents were church musicians.

He displayed musical talents from age 4 when he started singing in his church choir. Within three years, he started learning the Piano and showed great promise. His early music carries a theme of positivity and humility, partly due to this gospel influence.

Being partly home-schooled, Legend went to North High School when he was 12. Four years later, John Legend graduated as the Salutatorian. Good performance earned him offers from Ivy League Schools like the Harvard University and scholarships from Georgetown University.

At 16, John Legend got into the University of Pennsylvania to study English. He remained close to music, playing at a church in Scranton. He also directed a capella group called the Counterparts. He graduated with a major in English in 1999.

John Legend kept on making music and holding shows while at Penn. Although; he was talented, he remained unsure about taking music as a full-time career while he was a student.

John Legend tasted success quite early in his musical career. He met Lauryn Hill in 1998, and played piano on her song ‘Everything is Everything.’ He was still an undergraduate, then. After college, he took up a consulting job with the Boston Consulting Group, but continued to perform, holding shows and singing at nightclubs. This earned him a large audience base and a loyal fan-following.

In 2001, he met Kanye West, cousin to his roommate and music director Devo Springsteen. He decided to take up music full time and quit his job. After joining West’s labelG.O.O.D, he changed his artist name to John Legend.

In 2004, John Legend shot to fame. His debut R&B album ‘Get Lifted’ went platinum. The song ‘Ordinary People’ was a hit and won him a Grammy with critical acclaim. He won three Grammy Awards that year for: ‘Best New Artist,’ ‘Best R&B Album’ and ‘Best R&B Male Vocal Performance.’

Two years later, he achieved similar success with his album “Once Again.” His album “Evolver” came in 2008 and was certified Gold. John Legend successfully explored the pop territory more, with this album. He also collaborated with various artists like Jay Z, Alicia Keys, Twista, The Black Eyed Peas, Kanye West and more.

During the same time, he began his acting career. He mostly features as himself, with his performances closely related to his singing. In 2008, he appeared as Marcus Hooks in the movie Soul Men.

John Legend is known for his unique voice. His singing sounds fresh and positive. His ability to sing with emotions brought him continuous success over the years.

An Obama Supporter, he sang in the video ‘Yes We Can’ produced by Will.I.Am for Barack Obama in 2008.

He got together with the hip-hop band ‘The Roots’ and recorded ‘Wake Up!’. The album mostly features cover songs from the ‘Soul Genre’ of the 60s and 70s. The album went on to win the “Best R&B album” award for 2010.

He continued his collaborative work and toured with the British band Sade in 2011.  His fourth studio album ‘Love in the future’ came in 2013. His single ‘All of me’ took about six months to become number one on the Billboard Hot 100, but was a sensation all over the world. Legend’s emotional singing accompanied by the piano made this song a commercial hit. It was the third best-selling song of 2014 worldwide. John Legend dedicated ‘All of Me’ to his wife, Chrissy Teigen. The music video for the song has over a billion views on Youtube, the most watched video from John Legend.

John Legend won the Academy Award in 2015 for Best Original Song. He recorded “Glory” with the rapper “Common” for the film Selma.

John Legend released his fifth studio album “Darkness and Light” on December 2, 2016. It features a song ‘Right By You’ dedicated to his daughter, Luna. “Darkness and Light” is an ambitious project and presents a range of genres from R&B, Soul, Pop and some Jazz. The album also features tracks from “Chance the rapper.”

In 2017, John Legend did a duet with ‘Ariana Grande’ for the Disney movie Beauty and the Beast.

John Legend faced a Copyright Infringement lawsuit in the US District Court of New Jersey-Newark, filed by songwriter Anthony Stokes. Stokes alleged that Legend’s song “Maxine’s Interlude” was a rip-off of his song “Where are you now?”. He gave a demo of this song to Legend in 2004 after a concert performance. Legend did not get back to him, but two years later, he released “Maxine’s Interlude” which was too similar to Stokes’ composition.

John Legend denied these allegations, however, a year later, they settled the lawsuit for an undisclosed amount.

John Legend has received multiple awards and nominations in his career. This includes 10 Grammy awards, the first one of these came in 2006 as the “Best New Artist.” He also earned an Academy Award and a Golden Globe for his song ‘Glory’ shared with rapper Common. The song was featured in the film Selma.

John Legend has also won one American Music Award, one BET(Black Entertainment Television award), two Billboard Music Awards for ‘All of Me’ and a Golden Globe for the song ‘Glory’.

With Kanye West and Big Sean, he won the ‘Best Video with a Social Message’ award from MTV for ‘One man can change the world.’

Overall, he has 31 awards to his name and several nominations.

John Legend is well known for his philanthropic works. He is a promoter of Quality Education, Health and Women’s rights. A feminist at heart, he has performed benefit concerts, songs and charity events for women’s cause and HIV/AIDS awareness.

John Legend works for the cause of Quality Education. He sits on the boards of Teach for America, The Education Equality Project, the Harlem Village Academies and Stand for Children. In 2016, he donated $500,000 to Springfield City School District for auditorium renovation.

He has also performed in several fund-raising events such as the Hope for Haiti.

John Legend married long-time girlfriend and model, Chrissy Teigen in 2013, after a seven-year relationship. They were blessed with a daughter in 2016. The couple named her Luna. He has two dogs named Puddy and Pippa.

John Legend is an active supporter of quality education and works for women’s rights, health, and social justice.

John Legend is a fan of college football but prefers watching the games on TV. He sang the National Anthem for the NBA finals in 2016.  He also likes to read non-fiction books. He likes to listen to Marvin Gaye.