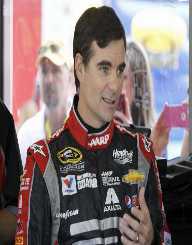 Former American professional stock car driver and racer Jeff Gordon is an announcer for Fox NASCAR. Gordon is also a four-time NASCAR cup winner and 4-time Brickyard winner. Throughout his racing career, Gordon has been a source of inspiration for racing aspirants and even kids from a humble background who want to make it big through hard work, determination and talent. Gordon is considered to be among the 50 greatest NASCAR drivers. His exploits on the race track have made him an icon with legendary status.

Jeff Gordon was born on August 4, 1971, in Vallejo, California. His star sign is Leo, and his full name is Jeffrey Michael Gordon. His parents are Carol Anne Bickford and William Gordon. They divorced each other when Jeff was just a few months old, and his mother remarried to John Bickford who was incredibly supportive towards Jeff. At four years of age, Gordon started riding the BMX Bicycle that his stepfather bought for him. Soon he turned his passion to race cars and began competing at the age of five.

At eight years of age, Gordon got his first Quarter Midget title. To support his racing dream, his parents moved to Pittsboro. Gordon continued his training extensively and won multiple races to get the title of Rookie of the year.

Jeff Gordon won his sponsorship from Hugh Connerty in 1990. Connerty co-owned Hooters, and with his help, Gordon participated in his career’s first Busch race. He finished a modest 39th.  Gordon’s racing skills improved significantly after that. In 1993, he set a NASCAR record and made his debut in the prestigious Winston cup. In the next season, he came in eighth. Finally, in 1995 he created history by winning the Winston Cup for the first time. He defeated the 7-time champion, Dale Earnhardt.

In 1997, Gordon added the Daytona 500 to his list of accomplishments becoming the youngest driver in history to do so. 1998 was an excellent year for Gordon, as he created a world record by winning the Winston Cup for the third time in a row.

His racing career’s 50th win came in 2000. Jeff Gordon also won at the Sears Point Raceway and Richmond. For the next few years, Gordon’s career saw ups and downs. He had a rocky start in 2002 but then went on to win major titles like the Brickyard 400 in 2003 for a record fourth time. In 2005, he won the Daytona 500.

Gordon retired from full-time driving in 2015 and instead decided to join the broadcasters’ booth.  He has appeared as himself in guest roles in several TV shows and is currently an announcer for Fox NASCAR.

Jeff Gordon has won several awards and trophies in his career. He won the Rookie of the Year award in 1991. Two years later, he won the Winston Cup’s Rookie of the Year. He is named among the 50 greatest NASCAR drivers. In 2009, he became an inductee into the Auto Racing Hall of Fame. One year later, he won the Silver Buffalo award. Due to his philanthropic activities, he also earned a Heisman Humanitarian Award.

Jeff Gordon has been married twice. His first marriage was to Brooke Sealey whom he met after a race. They married in 1994 and remained together for eight years. In 2002, Sealy separated from Gordon and filed for divorce on account of an extramarital affair on Gordon’s part. She accused him of fooling around with Deanna Merryman – a playboy model. After the divorce was finalized with Sealy winning a hefty amount as compensation, Gordon stayed single for a few months.

In 2004, he began dating Ingrid Vandebosch, and they got engaged in 2006. They have two children – a daughter named Ella (born in 2007), and a son named Leo (born in 2010). Jeff Gordon is extremely popular in the US and has an expressway named after him.