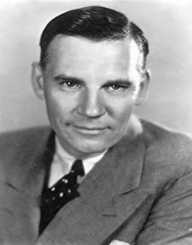 Walter Thomas Houghston was born 5th April 1883 to Robert and Elizabeth Huston. He was born in Toronto, Ontario, in Canada. Houghston was one of four children, with one brother and two sisters. His father was a farmer, but he then established a construction company.

Huston started his career in construction. He attended the Shaw School of Acting out of hours. In 1902, he debuted in his first stage production. He performed in the play In Convict Stripes and toured with the troupe as well. Over the next twenty years, Huston performed in Vaudeville with his second wife.

In 1924, he debuted on Broadway. He appeared in Mr. Pitt. Huston followed up his debut performance with regular work on Broadway.

Following on from Broadway, Huston progressed into movie roles in 1929. Throughout the 1930s and 1940s, Huston continued to appear regularly in both movies and on the stage. His fame and popularity continued to grow until he was one of the most recognized actors in the United States.

During World War II, Huston appeared in several government propaganda films in support of the Allies. Between 1929 and 1950, Huston performed in 50 films. These include Abraham Lincoln (1930), Dodsworth (1936), and The Treasure of the Sierra Madre (1948).

In 1960, Huston joined other celebrities with a star on the Hollywood Walk of Fame. He also received an induction into the Grammy Hall of Fame in 1984.

Huston died on 7th April 1950. Cause of death was an aortic aneurysm.