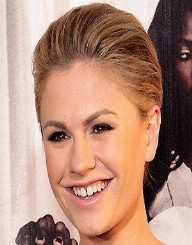 Anna Paquin was born on 24th July 1982, to Brian and Mary Paquin. She was born in Winnipeg, Manitoba, in Canada. Anna Paquin was the youngest of three children, with an older brother and sister. Her parents were both teachers. When she was four years old, the family moved to New Zealand, which was where her mother came from.

Anna Paquin began studying at Columbia University, but after 12 months she took leave to work on her acting career.

Anna Paquin's acting career had begun back in the early 1990s. She was cast as one of the main characters in the movie, The Piano, which was set in New Zealand. The movie was released in 1993.

Anna Paquin was so successful in her role she won an Academy Award. She was then invited to join the William Morris Agency, and she continued to receive offers for other movie roles. Paquin turned down the movie roles at first, although she did film some television commercials. Her next movie role was in 1996, in Jane Eyre. She continued her movie acting, and in 2000, was cast as the mutant superheroine, Rogue, in X-Men, by Marvel Comics.

Anna Paquin established a production company called, Paquin Films, in conjunction with her brother, Andrew. Anna Paquin starred in, as well as produced, Blue State, which was released in 2007 and was created by their company. She has starred in over 30 movies, including three X-Men movies (2000, 2014, 2016), Almost Famous (2000), and The Romantics (2010). Paquin has also been in over ten television series and movies, including Bury My Heart at Wounded Knee (2007), and 80 episodes of True Blood, which ran from 2008 to 2014. Anna Paquin was also in ten different theatre productions between 2001 and 2006.

Anna Paquin has been nominated 37 times for awards and has won several, including, an Academy Award, a Drama Desk Award, a Golden Globe, and two Satellite Awards.

In 2010, Anna Paquin married Stephen Moyer. Moyer is an actor, and he was Paquin’s co-star in True Blood. The couple has two children, twins, Charlie and Poppy. They also have two children from Moyer’s previous relationship, a son, Billy, and daughter, Lilac.

Anna Paquin supports various charities and causes. One that she has been outspoken on is the Give a Damn campaign for the True Colors Fund about LGBT equality.

She has also supported the Children’s Hospital Los Angeles, Elton John’s AIDS Foundation, and the Make-a-Wish Foundation, amongst others.