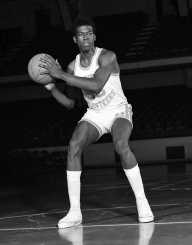 ESPN filmed a documentary Bernie and Ernie, a look into the friendship between Bernard King and fellow New Yorker Ernie Grunfeld. The pair were college teammates at the University of Tennessee and played together in the New York Knicks in the 1980s. The documentary also looked into King’s disadvantaged childhood as well as racism he was exposed to in Knoxville and his later problems with alcohol abuse.

His parents were devout churchgoers, but Bernard King did not have a good relationship with his father who mostly ignored him. King sought an outlet in basketball, but because his parents did not believe in other activities apart from church going on a Sunday, he used to get beaten for going outside to play. To escape his dysfunctional family, Bernard King involved himself in basketball and said in the documentary that his famous scowl is a by-product of his childhood feelings of anger, loneliness, shyness and very low self-esteem.

Bernard King studied at the University of Tennessee.

In February 1977, Bernard King was traded by the Indiana Pacers along with Darnell Hillman, to the New York Nets for John Williams. On the 10 June 1977, the New York Nets drafted King in the first round (7th pick) of the 1977 NBA Draft.

King was a small forward who was known for speed and scoring. He was the lead scorer in the NBA during the 1984-85 season with 32.9 points a game.

In October 1979, Bernard King, John Gianelli, and Jim Boyland were traded by the New Jersey Nets to Utah Jazz for Rich Kelley, and in September 1980, the Utah Jazz traded King to the Golden State Warriors for Wayne Cooper and a 1981 second round draft pick. Golden State Warriors traded King on the 22 October 1982 to the New York Knicks for Michael Ray Richardson and a 1984 fifth-round draft pick.

In 1984 Bernard King scored fifty points in back to back games against the Dallas Mavericks and the San Antonio Spurs, he was also impressive against the Detriot Pistons that year. Overall Bernard King averaged 42 points for the series.

During his professional career, Bernard King was selected to the NBA All-Star Game four times, and he was also in two All-NBA First Teams.

During his time with the Golden State Warriors, he won the NBA’s Comeback Player of the Year award for the 1980-1981 season. In 2006, TNT Network’s basketball panel named King as one of the Next 10 in the NBA’s greatest players listed celebrating the 60th anniversary of the NBA. In 2012 Bernard King was inducted into the Naismith Memorial Basketball Hall of Fame.

Bernard King has a successful career in broadcasting.