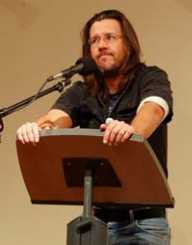 David Foster Wallace was born on February 21st, in 1962. Wallace is best remembered for his unique contribution as a writer. His most exceptional piece was the novel he published in 1996 dubbed Infinite Jest. This novel was acknowledged by the Time Magazine as a best-seller.

David Foster Wallace was born on February 21st, in 1962. His birthplace was in Ithaca in New York. He was the son of James Donald Wallace and Sally Jean Wallace. He has a younger sister called Amy Wallace-Havens. Both of his parents were professors. Growing up, Wallace fancied playing tennis.

Wallace joined Amherst College where he took Philosophy and English lessons. He later graduated in 1985. By the time he graduated with a master’s degree, he had drafted his first novel called The Broom of the System. This book was published in 1987. To this point, Wallace had made up his mind to becoming a professional writer.

His work in 1987 earned Wallace national attention. His work was critically praised all over as an exceptional piece. A few years later in 1991, he took a job as a college professor. He began teaching Emerson College situated in Boston during this period. Sooner or later, he joined the English department at the Illinois State University. Here, Wallace began to work on his second novel called Infinite Jest. In 1993, he completed it submitting his first draft for editing. The novel was officially published in 1996.

With the immense success that Infinite Jest had, Wallace was a household name. After this, he took on journalistic assignments from notable national magazines including the Atlantic, Harper’s and several others. Other works that he went on to publish include A Supposedly Fun Thing I'll Never Do Again - 1997, Brief Interviews with Hideous Men - 1999, Oblivion-2004 among others.

Apart from writing books, Wallace spent the better part of his time tutoring in several universities such as the Emerson College, Pomona College, and the Illinois State University. Due to his contribution as a writer, he was bestowed with a number of awards including the MacArthur Fellowship, Whiting Writers' Award, and a Lannan Literary Award.

Unfortunately, behind the rosy career that Wallace portrayed, deep inside depression haunted him. This led to his death on September 12th, in 2008 after he committed suicide. After his demise, his last publication was The Pale King - 2011.