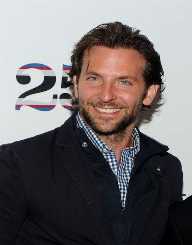 Bradley Cooper was born on January 5, 1975, in Philadelphia, Pennsylvania, USA, to his lucky parents Charles “Charlie” Cooper and Gloria (Campano) Cooper. He also has one sister, Holly. Bradley Cooper is a well known American TV and film star, but he was not always interested in acting.

In fact, since he was a young boy until his college years, the more interesting in cooking than anything else. Luckily, he changed his interests and became one of the most handsome and talented American actors alive today.

Cooper attended Georgetown University and graduated with a bachelor’s in English in 1997. After finishing up his undergraduate studies at Georgetown, Bradley Cooper went on to enroll in a master’s degree program at the Actor’s Studio Drama School, which is located in New York City, New York.

Cooper’s first acting role was for a fast-food chain commercial. However, his first television debut was in 1999 when he played a guest character named Jake in an episode of Sex and the City. The next year, he acted in a made for TV movie called Wall to Wall Records.

Another television show he acted on was The $treet, in which he played a recurring character, Clay Hammond, for five episodes. It wasn’t until 2001 that he got his first non-made for TV movie, which was the real start of his acting career. He played Ben in the comedy film, Wet Hot American Summer.

After filming Wet Hot American Summer, Bradley Cooper went back to filming movies TV shows and made for TV movies. It wasn’t until 2005 when he got back into movies. This is when his rise to stardom began to speed up. Below is a list of some of his most famous movies.

Wedding Crashers, Failure to Launch, The Rocker, Yes Man, He’s Just Not That Into You, The Hangover (Part I, II, and III), Silver Linings Playbook, American Sniper, Guardians of the Galaxy

Along with Acting, Bradley Cooper has produced several films, many of which he has acted in. These include the following list and several more. Asterisks (*) are next to the films he was executive producer of.

Bradley Cooper’s acting career has earned him 29 wins and 65 nominations (as of 2016). Some of his most impressive wins include the list below.

Outside of his film-related awards, Bradley Cooper was awarded the People’s magazine award for Sexiest Man Alive in 2011.

In the short time that Bradley Cooper has been acting, he has made millions of dollars from his famous movie roles. As of 2015, he is estimated to be worth about $100 million dollars.

Bradley Cooper has dated many famous women over the years. He married Jennifer Esposito in 2006, but they divorced in 2007. The couple did not have any children together.

After the divorce, he had more relationships with famous women. Bradley Cooper has been dating Irina Shayk since 2015, and the couple announced that they would be having a child together in November 2016.