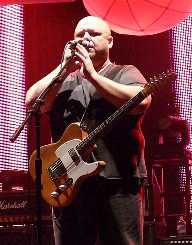 Charles Micheal Kittridge Thompson IV best known as Black Francis is an American singer, guitarist, and songwriter born on April 6, 1965. His name Black Francis was acquired during his time with band Pixie where he served as a frontman. However, during his solo career after the band’s disbandment, he used the name Frank Black but later re-adopted the name in 2007. As a solo artist, most of his lyrics were based on incest, science fiction, surf culture surrealism and biblical violence.

Charles Michael Kittridge Thompson IV was born on April 6, 1965, in Boston, Massachusetts. The family later lived in Los, Angeles, California since his father worked in a bar there. As a kid, he became interested in music because his parents were also music lovers. Her mother bought him his first guitar, a Yamaha classical. Black Francis became attached to religion because of the influence of his stepfather who was very religious. His days in church influenced most of his lyrics.

Black Francis started learning the guitar his mother bought him at age 11. At age 13 he attended a summer camp which singer and songwriter Larry Norma attended. Norman’s performance at the time would later influence his music career. He graduated from high school in 1983 and then enrolled at the University of Massachusetts Amherst where he pursued anthropology. During his university education, he met Joey Santiago, who later became a Pixies member. Santiago was also a music fan and actually introduced Francis to punk music and the songs of David Bowie.

Earlier, Francis had composed songs like Here Comes Your man and an instrumental version of Velvety. He was given a Teenager of the Year award for those compositions. Black Francis discovered the band The Cars and Pixies during his days at the University of Massachusetts Amherst. He later dropped out of school to pursue music after an exchange program in San Juan, Puerto Rico

After returning from the exchange program in Puerto Rico, Black Francis left Massachusetts for Boston with his schoolmate, Santiago in the early 1980s. He got a job at putting buttons on teddy bears in 1985. That time, he was active in composing songs on his acoustic guitar and also writing lyrics.  A year later, he co-founded the band Pixies with Santiago and hired other members like Kim Deal, bassist, David Lovering, drummer. The band first released was an 18 track demo titled The Purple Tape. The production was at the time supported by Francis’s father.

The band was able to make headway after that release by signing a contract with the record label 4AD. The first release under the label was a mini album Come On Pilgrim in 1987, and that was the time he chose the name, Black Francis. The band followed up with the release of the album Surfer Rosa in 1988. With the exception of the song Gigantic, Black Francis wrote all the songs on the album. A European tour in support of the album later followed where he met Eric Drew Feldman, a future contributor to his solo career and also Pixies.

The band’s popularity grew but went into hiatus after some disagreement between Francis and bassist Kim Deal. After a year on hiatus, the band was resurrected and came out with the album Bossanova, 1990 and followed it with Feldman collaborated album Trompe le Monde in 1991. After the release of these albums, the band was disbanded in 1992 with anofficial announcement in 1993. This was because of rising tempers between Deal and Black Francis.

Black Francis began a solo career after the disbandment of Pixies with a cover album. This time his friend Feldman was at hand and helped with the production of the album as well as playing the keyboard and bass guitar for most of the songs. He also got help from other Pixies members like Santiago on lead guitar and Nick Vincent, drummer. For his solo career, he chose the name Frank Blank in 1993, a name the first album also had.

His second solo album was Teenager of the Year which had 22 songs including a track headache. Though the album was not very successful commercially, it was hugely received regarding play. This time most of his songs were based on broad topics unlike his days with Pixies. His third album The Cult was released by American Recordings in 1996 after he had left 4AD the previous year.

Frank Black and the Catholics

Black Francis' solo career was not very successful regarding commercials which made him form another band, Frank Black, and the Catholics. The band released its first album in 1997. He then recorded an alive-to-two-track demo which was successful, but a later conflict with American Recordings delayed his further releases.

The band’s later works were released by SpinArt Record. Their album was also the first to be posted on eMusic service for commercial downloads. Frank Black and the Catholic's recordings at the time were live-to-two-tracks a shift from the multi-track recording. The band in 1999 released Pistolero and later in 2001 released Dog in the Sand. Other albums by Frank Black and the Catholics are Black Letter Days, Devil’s Workshop in 2002, Show Me Your Tears in 2003.

Reunion of Pixies and Later career

After about eleven years of their disbandment (1992), Pixies finally came back in 2003 and embarked on a tour in the US, Canada and some parts of Europe in 2004. The band recorded Bam Thwok and released it on iTunes Music Store. The double album Frank Black Francis was also released in that same year. Later in 2004, Black Francis collaborated with musicians in Nashville like Steve Cropper, Spooner Oldham, Reggie Young and Anton Fig with Jon Tiven as a producer to release Honeycomb in 2005. The album had excellent reviews which would inspire their future releases.

That year Black Francis performed a duet on Watch You’re Doing with Larry Norman at his concert in Salem, Oregon. The Nashville group released a double album, Fast Man Raider Man in 2006. He also continued to work with Pixies and did other solo projects like NoneStopErotik in 2010.

Black Francis appeared in several television shows during his career. He had a session on 120 Minutes and The Late Show in the US and later The Word in the UK. He was not a fan of doing music videos and hardly partook in one. However, as a solo artist, he released the video of Dog on the Sand by Robert Onion and Men in Black which was very popular. He did a promotional video for McSweeney’s children’s book Lost Sloth in 2013.

Black Francis dated Jean Walsh during the time of Pixies. He met her during the early days of the Pixies. He is married to Violet Clark with three children. Francis, however, has two children from the previous relationship.