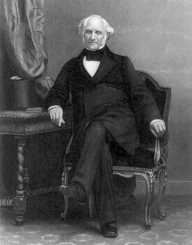 Philanthropist George Peabody was born on the 18 February 1795 in Danvers, Massachusetts to Judith Dodge and Thomas Peabody.

Coming from a family of modest financial means, Peabody left school at age eleven and was apprenticed to a grocer in his hometown.

In 1812 George Peabody was called up as a soldier and went to war. In 1814, he met Elisha Riggs, and this led to a business partnership between the two men. The pair set up a wholesale business selling dry goods and called it the Peabody, Riggs, and Company. The venture was a success, and in time they opened other stores in Baltimore, Philadelphia and New York City.

George Peabody relocated to Baltimore, Maryland in 1816 and he was domicile there until 1837. He traveled for the business, including a trip to London to promote the sale of American cotton.

His partner Riggs retired in 1828 and Peabody took over as the senior partner of the company.

Wanting to attract foreign capital into the United States, Peabody established a banking business specializing in securities and foreign exchange. He was also involved in railroads and 1836 he was appointed the president of the Eastern Railroad.

Then in 1937, Peabody migrated to London. His business acumen and financial dealings during the Panic of 1837 saw his fortune increase, and in 1854 his bank went into partnership with Junius Morgan.

After moving to England and witnessing firsthand the poverty and dislocation caused by the industrial revolution George Peabody turned to philanthropy, explaining to one of his nephews that he remembered experiencing hardship as a child and how he was robbed of an education because of it.

One of the first things Peabody did was to set up the Peabody Donation Fund, today operating as the Peabody Trust. The fund aimed to provide subsidized housing for the poor of London. The first housing scheme managed by the trust was opened in February 1864 in Commercial Street, Whitechapel, London.

Peabody supported numerous other charities and institutions in the UK and America. In America, he set up the Peabody Education Fund for destitute children living in the southern states of the USA as well as the Peabody Institute music academy. Millions of dollars were donated in his lifetime including to The Peabody Museum of Archaeology and Ethnology at Harvard University, the Peabody Essex Museum in Salem, Massachusetts and the Peabody Donation Fund in his hometown of Danvers.

George Peabody died in London, England 4 November 1869. Under the terms of his will, his body was shipped home so that he could be buried in his hometown of Danvers. The name of the town was later changed from Danvers to Peabody, in his honor. Peabody remained single and had no direct descendants.