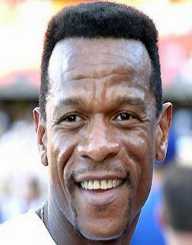 Rickey Henderson was born on December 25th, in 1958. He is a well-known baseball player who once played in the Major League Baseball. From 1979 to 2003, Henderson played for nine different teams. As a result of his exceptional performance on the pitch, Henderson was given the nickname “Man of Steal.” He usually played the position of a leadoff hitter.

Rickey Nelson Henley Henderson was born on December 25th, in 1958. His birthplace was in Chicago, Illinois. His parents named him after the famous singer and actor Ricky Nelson. His father left the family when Henderson was only aged two. As a result of the departure of his father, his mother got married again to Paul Henderson. This is where Henderson got his surname from.

Rickey Henderson joined Oakland Technical High School where he later graduated in 1976. In school, he engaged in different sports including football, baseball, and basketball.

Immediately upon graduating from high school, Rickey Henderson was drafted in the Major League Baseball that year. At first, he went to play for the Oakland Athletics. However, he began his minor league career while playing for the Boise Hawks.

The next season, he went to play for Modesto Nuts. He broke records here as he batted .345 in only 134 matches. Together with Darrell Woodard, the two almost broke the league’s record for stolen bases.

Another minor league team that Henderson played for was the Jersey City A's. This was on the Eastern League.

As an Oakland player, Rickey Henderson played his first game for the team in 1979. In his first game, he managed to get only two out of four possible hits with a single stolen base. In the 89 games that he played for Oakland, he batted .274 alongside 33 stolen bases.

The following season, Rickey Henderson broke the record with 100 stolen bases. This earned him recognition for he was the third only modern-age player to hit that record. With his new record, it meant that he had surpassed records of Eddie Collins’; 81 steals in 1910 and Ty Cobb's record of 96 steals in 1915.

During the season’s winter break, Henderson joined the Puerto Rican Professional Baseball League where he also broke the league's record with 42 stolen bases. After a year, Henderson was among the candidates contending for the Most Valuable Player Award.

Later, in 1981, his defense strategies helped him bag home the Golden Glove Award.  The following year, he continued performing well outclassing Lou Brock's record of 118 stolen bases. During this time, he managed to steal 130 bases which earned him the immense recognition of a showman.

In late 1984, Rickey Henderson was sold to the New York Yankees. In his debut season with the Yankees, he was the leader regarding the runs scored with his mark of 146 runs and 80 stolen bases.

After a lengthy and successful baseball career, Rickey Henderson was last seen on the pitch on September 19th, 2003. Following his retirement, he was hired as the New York Mets’ special instructor in 2006. The following year, he was promoted to become the team’s first coach.

Rickey Henderson tied the knot to Pam Henderson. Together, the two have been blessed with three daughters.