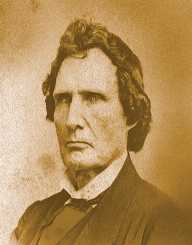 Thaddeus Stevens was educated at the Peacham Academy, where he excelled in his studies. He proceeded his education at Dartmouth College and spent a semester studying at the University of Vermont. After completing his undergraduate education, Stevens moved to York, Pennsylvania. He was working as a teacher during the day, but in the evening studied law. After two years of intensive studies, he was admitted to the bar and began his law practice in Gettysburg.

In 1833, Thaddeus Stevens began to take his first steps in politics, when he served in the state legislature as the member of Anti-Masonic Party. He was a supporter of developing banks, public schools and was an active spokesman against slavery. He also spoke out against Jacksonian Democrats and Freemasons believing that they were unfairly gaining governmental positions.

In 1849, Stevens began to serve at the U.S. House of Representatives. During his tenure, he advocated for tariff increases and continued to oppose slavery. In the 1850s he joined the newly formed Republican Party. He served as a member of the House until his death.

In 1848, the Free Soil Party was formed, with the primary goal to oppose the extension of slavery into western territories. The Republican Party subsequently absorbed the party. Stevens was also involved in the Underground Railroad project, which helped slaves to run away to Canada. Abolition of slavery became Stevens’ main political focus, and he emerged as one of the most militant Radical Republican in the nation. By 1866, Radical Republicans took control of the Congress, and Steven’s loudly condemned the Confederacy.

The Radical Republicans began to set the course for the Reconstruction of the South. Thaddeus Stevens' work was largely resisted by President Andrew Johnson, which prompted Stevens to fight against him. Stevens introduced the resolution for Johnson’s impeachment and chaired the committee responsible for impeachment procedures.

After Civil War, Stevens served on the Joint Committee on Reconstruction and had an important role in drafting the 14th Amendment and the Reconstruction Act of 1867. The 14th amendment later served as the basis of civil rights movement.