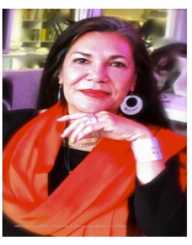 Ana Castillo is a Mexican-American (Chicana)writer and poet, playwright, translator, and editor. Born on June 15, 1953, she is also a known for her experimental style of writing and addressing race and gender issues through her writings. She is regarded as one of the prominent voices in Chicana Experience. In 1990, she released the novel Sapogonia, which became a New York Times Notable Book of the Year. Her works include Otro Canto, 1977, The Invitation, 1979, So Far From God, 1993, My Daughter, My Son, the Eagle the Dove: An Aztec Chant, 200, The Guardians, 2007, among others.

Ana Castillo is the editor for the arts and literary magazine, La Tolteca. She held the first Sor Juana Inés de la Cruz Endowed Chair at DePaul University. She has received several awards including Before Columbus Foundation’s American Book Award, and Mountains and Plains Booksellers Award.

Ana Castillo was born on June 15, 1953, in Chicago to Raymond and Rachel Rocha Castillo. She received education from Jones Commercial High School and after graduating enrolled at the Chicago City College. Ana Castillo was transferred to Northeastern Illinois University where she graduated with a B.S. in Arts with a minor in secondary education. She continued her education at the University of Chicago where she earned an MA in Latin American Studies in 1979.

Ana Castillo started a career as a teacher at Santa Rosa Junior College where she taught ethnic studies. Within that period, she was also a writer-in-residence for the Illinois Arts Council. She also spends some time teaching at Malcolm X Junior College and would later also teach at Sonoma State College.

Ana Castillo as a writer is considered one of the pioneers in Chicana literature. She reveals that "Twenty-five years after I started writing, I feel I still have a message to share."She has many books to her credit on various topics addressing Chicana feminism with much emphasis on racism, identity issues, and classism. Castillo represents Chicana feminism with the term “Xicanisma” to explain the politics of what it takes to be a Chicana in American society.

Ana Castillo began her writing career as a poet and has since published several works to her credit. With most of her works, she combines Spanish and English, and this can be witnessed I Ask the Impossible. In 1977, she released Otro Canto and followed it with The Invitation two years later. Her other works include Women Are Not Roses, 1984, My Father Was a Toltec in 1988, I Ask the Impossible 2000, "Women Don't Riot" and "While I was Gone a War Began."

Ana Castillo is bisexual and known for writing books on the subject. The book, Give It to Me, won her a Lambda Literature Award for bisexual fiction in 2015 and another one for the book Black Dove: Mama, Mi’jo, and Me in 2017.

Ana Castillo has won several awards including American Book Award from the Before Columbus Foundation, Mountains, and Plains Booksellers Award, a Carl Sandburg Award, and The Mixquiahuala Letters. She also received a Sor Juana Achievement Award by the Mexican Fine Arts Center Museum in Chicago in 1998.