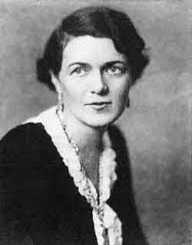 The famous Caresse Crosby was known for her modern bra invention. She was born on 20th April 1891. Caresse was a publisher, activist, and writer residing in America. She had helped many authors publish their work, the likes of Charles Bukowski, Ernest Hemingway, Henry Miller, Archibald MacLeish, Anais Nin, Kay Boyle, Robert Duncan, and Hart Crane.

She grew up in upper-class lifestyle.

The upper-class lifestyle exposed her to regular balls school, Ivy League school dances and formal horse riding school. She became a good dancer and was called to different nightclubs to present her dance moves.

Caresse Crosby's dancing presentation in the year 1910 led to the invention of the handkerchief bra for comfortability.

On February 12th, 1914, she patented her invention. Her design never lasted long in the market. In 1922, she opened the Fashion Form Brassiere Company in the streets of Washington, Boston. Later she closed down and sold the business to The Warner Brothers Corset Company.

Caresse Crosby started poetry publications in the year 1924. Her first book being Crosses of Gold. Her second book was published in the year 1926 with a title Graven Images. Together with her second husband Harry, they established a publishing company called Editions Narcisse in Paris, Europe. She only used the company to publish her work.

She wrote several love related poems, Painted Shores, The Stranger, and Impossible Melodies. In the year 1928, they changed the company's name to Black Sun Press and started publishing amazing stories. This gave the company fame. The company published for the minority in the society exposing them to the world. The likes of James Joyce's (Tales Told of Shem and Shaun), Kay Boyle's (short stories in the year 1929), Eugene Jola's (The Revolution of the Word Proclamation), among others, most of these writers become famous later.

Caresse Crosby got into marriage three times. Richard R. Peabody was her first husband in the year 1915. They had two children, William Jacob Peabody, and Poleen Wheatland Peabody. In the year 1922, they divorced.

Caresse traveled a lot in her life across Europe and America.

Caresse Crosby died out of Pneumonia Complications on January 24th, 1970 in Rome Italy. She died at the age of 78.