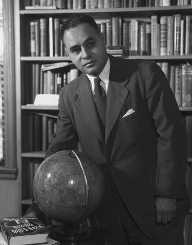 Ralph Bunche was born on August 7, 1903. He was an America academic and a political scientist. He was also a United Nations diplomat. In 1950, he was the first African American to win the Nobel Prize. He was actively involved in the Martin Luther King’s Movement. He also played a role in the organizing and administering of the United Nations. He was an academic who spent most of his life in the department of political science at the Harvard University.

Ralph Bunche was born on August 7, 1903, in Detroit. He was born to Fred Bunche who was a barber and Olive Agnes who was a musician. His mother died when he was a teenager, and his father abandoned him thereafter. He was brought up alongside his sister. Both of them were taken care of by their maternal grandmother, Lucy Johnson Taylor. They were raised in Los Angeles. To support his family, Ralph would get part time jobs such as carpet laying among other odd jobs. In 1927, he graduated from the University of California in Los Angeles.

Ralph was concerned with the issue of racism since he was a descendant of a slave. His concerns led him to serve as a co-director at the Institute of Race Relations at the Swarthmore College. In 1940, he got a job as an investigative researcher and writer for An American Dilemma which was a Swedish sociologist’s study of racism in America. During World War II he became a senior social analyst at the Office of Strategic Services. He was also a part of the National Defence Program. He later worked in the United State’s State Department as a planner. He was among the main planners who were tasked with the formation of the United Nations. In 1947, Trygve Lie who was the then United Nations Secretary General approached him to join the United Nations Secretariat as a director of the Trusteeship Division. In the same year, he became a part of the United Nations Special Committee on Palestine. The United Nations planned to divide Palestine into Arab and Jewish states, but the Arabs were against the idea. The refusal of the Arabs led to the first Arab Israeli War.

In 1948, Ralph became the United Nations chief negotiator after his supervisor was assassinated. He led the negotiations between the Arabs and the Israeli groups thus reaching an agreement in 1949. In 1956, he became the director of the peacekeeping operations in the Suez Area of the Middle East. In 1960 and 1964, he led peacekeeping operations in Congo and Cyrus respectively. He was actively involved in the Civil Rights Movement that was begun by Martin Luther King. He was also a member of the board of the National Association for the Advancement of Colored People.

In 1950, he was the Nobel Peace Prize for managing to resolve the Arab Israeli conflict in Palestine. In 1951, he received the Silver Buffalo Award from the National Boy Scouts of America. In 1963, he received the Medal of Freedom from John F. Kennedy. The Liberty District Ralph Bunche Community Centre was named after him because of his numerous contributions for colored people.

In 1930, he married Ruth Harris with whom he had three children, Joan Harris Bunche, Jane Johnson Bunche and Ralph Bunche Junior. He died on December 9, 1971, of diabetes mellitus at the age of sixty eight. He was buried at Woodlawn Cemetery, New York City.