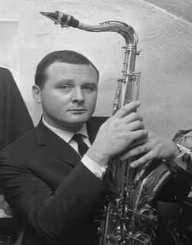 Stanley Getz was one of America’s finest jazz saxophonist. Born on February 2, 1927, he was known as The Sound, in recognition of his warm, lyrical tone and his fine, mellow timbre of his idol, Lester Young. Stanley Getz rose to fame in the 1940s with Woody Herman’s big band. His style and artistic play made the critic, Scott Yanow describe him as "one of the all-time great tenor saxophonists.”

Stanley Getz was born on February 2, 1927, at Vincent’s Hospital, Philadelphia to Al Gayetski and Goldie Yampolsky. His parent lived in Philadelphia but left for New York during the depression era. Stanley Getz was academically good and had good grades in school. Even at his young age, he was interested in playing musical instruments, and at age 13, his father bought him his first saxophone. Aside from that, Stanley Getz also got him a clarinet, but Stanley Getz was much into playing the saxophone and practiced with it eight hours each day. He received his secondary education at James Monroe High School in the Bronx.

Stanley Getz gained admission to the All City High School Orchestra of New York City in 1941. With this, he had an opportunity to receive private and free tutoring from Simon Kovar, a bassoon player from the New York Philharmonic. Nonetheless, Stanley Getz continued to play the saxophone. In order to pursue his musical career, Stanley Getz dropped out of school but was forced back to the classroom by the school system's truancy officers.

In 1952, Stanley Getz featured in Johnny Smith’s album Moonlight in Vermont, which became the top album of the year. This achievement built on Getz’s credentials and his reputation was enhanced. He worked in the Scandinavia from the mid to late 1950s playing cool jazz with the likes of Oscar Peterson, Johnny Smith and Horace Silver among several others.  In 1953, Stanley Getz was part of the group Dizzy/Gillespie/Stan Getz Sextet with a line up including Gillespie, Getz, Ray Brown, Max Roach and Herb Ellis. He returned to the United States in 1961, and that was when he became a central figure in introducing to the American audience bossa nova music.

In 1962, Stanley Getz collaborated with guitarist Charlie Byrd to record Jazz Samba, which was an instant hit selling over a million copies and won a gold disc. A song on the album, Desafinado won the Grammy for Best Performance in 1963. Soon after the first album, Stanley Getz collaborated with composer and arranger, Gary McFarland for the album Big Band Bossa Nova. Having achieved the desired results, Stanley Getz followed came out with another album Jazz Samba Encore teaming up with Brazilian guitarist, Luiz Bonfa, one of the originators of bossa nova. This also became a hit with about one million copies sold and winning his second gold disc.

In 1963, Stanley Getz collaborated with Joao Gilberto, Antonio Carlos Jobim, and Astrud Gilberto to record the album, Getz/Gilberto. A song on the album, The Girl from Ipanema won a Grammy while the album itself won two Grammys for Best Album and Best Single. In 1964, he followed it with the live album Getz/Gilberto Vol. 2 and also Stanley Getz Au Go Go that same year. His relationship with Astrud Gilberto came to light, and that ended the partnership between her and the husband, Joao Gilberto with Stanley Getz Along with Stanley Clark, Tony Williams, and Chick Corea, Stanley Getz recorded in the fusion idiom in 1972. At the same time, he experimented with an Echoplex on his saxophone.

Stanley Getz had a brief acting career by playing a cameo in the film, the Exterminator in 1980. In the mid1980s until 1988, Getz tutored at an artist-in-residence at Stanford University’s Stanford Jazz Workshop.

On November 7, 1946, Stanley Getz married Beverly Byrne, a vocalist with the Gene Krupa band. They were blessed with three children. In 1956, they got divorced, and Getz got married to his second wife Monica Silfverkiold in November that same year. They had two children, Pamela and Nicolaus. His marriage to Monica was characterized by series of abuse towards the children and at a time on Monica.

In 1981, Stanley Getz filled for a divorce, but that was denied until 1987. Monica, on the other hand, filled a petition to theUnited States Supreme Court to have the divorce verdict overturned in 1990 but the court declined to hear the case. Per the New York State law, a settlement agreement was to be heard in trial court and not the family court, which Monica saw as discriminatory against women, who may not be able to afford trial lawyers.

During his teenage, Stanley Getz fell into alcoholism and drug use. Stanley Getz got arrested for an attempted robbery at a pharmacy in 1954. Stanley Getz died on June 6, 1991, of liver cancer. Stanley Getz was cremated, and his ashes put in his saxophone case and poured six miles off the coast of Marina del Rey.