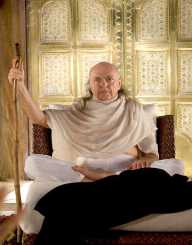 Adi Da Samraj was born as Franklin Albert Jones on November 3, 1939, in Queens, New York City. He grew up living on Long Island. Jones’ father was a salesman, but his mother-a housewife. He also had a sister, Joanne. As an adolescent, he served as an acolyte in his local Lutheran church. Since an early age, he wanted to become a minister. In 1957, Jones graduated from high school and started to doubt career as a minister. Instead, he went to college and graduated in 1961 with a degree in philosophy from Columbia University. Afterward, he went to Stanford University, from where he graduated with a Master’s degree in English literature in 1963.

During the time he finished his bachelor’s degree, Franklin Albert Jones began to experiment with hallucinogenic and other types of drugs, sometimes using them in heavy doses. Upon graduating from Stanford, Jones participated as a paid subject in drug trials for mescaline, LSD, and psilocybin. During the early 1960s, he and his girlfriend Nina Davis lived in Palo Alto, where he worked to support them, but in his free time, took drugs, meditated and studied hermeticism.

In 1964, Franklin Albert Jones experienced an intuitive impulse to leave California and went to New York City to search for a spiritual teacher. He settled in Greenwich Village and became a student of the oriental art dealer and guru Albert Rudolph. Under his guidance, Jones studied several spiritual traditions and techniques, like kundalini yoga. After Jones father told Rudolph that Jones once aspired to become a Lutheran minister, Rudolph insisted Jones to take several measures. This included marrying his girlfriend Nina, losing weight and giving up drug use, as well as preparing to enter the seminary. In 1967, Jones became a student at the Philadelphia Lutheran Theological Seminary. At the time, he underwent a major breakdown and had to be taken to a hospital. He was diagnosed with an anxiety attack, which he continued to experience throughout his life, which was followed by profound awakenings.

When none of the Lutheran professors acknowledged or understood his experiences, Jones left the seminary and briefly joined the Russian Orthodox Seminary in Tuckahoe, New York. After the brief time he spent there, Jones went back to New York and took a job working for the Pan American Airlines to earn enough money to go to Swami Muktananda’s ashram in India. He went to the ashram in 1968 and spent there four days, during which Swami Muktananda encouraged him to give up studies with Rudolph and begin to study with himself.

Upon returning to New York, Franklin Albert Jones and Nina became members of the Church of Scientology and severed all contacts with Rudolph. However, after a year spent in the church, Rudolph left the church and returned to India for a month, during which Swami Muktananda gave him the authorization to initiate other people in the Siddha Yoga.

In 1970, he, Nina and another former member of the Scientology church traveled to India to live at the Swami Muktananda’s ashram for an indefinite time. Upon their arrival, the trio discovered that the ashram had numbers of other American visitors, and was very disappointed with the experience. Three weeks in, Jones experienced a vision of Virgin Mary, directing him to take a pilgrimage to Christian holy sites. He spent two weeks in Europe and the Middle East and returned to the United States, where he settled in Los Angeles.

In 1970, while Franklin Albert Jones was at the Vedanta Society Temple in Hollywood, Jones experiences a state of complete spiritual enlightenment. After this, he wrote an autobiography The Knee of Listening. The same year, Swami Muktananda visited him in California during his worldwide tour together with Rudolph. Jones and his friend Sal Luciana opened a spirituality bookshop in Los Angeles, the Ashram Books. There he began giving lectures and soon attracted a small group of followers. His charismatic style of speaking and the traditional Indian style, surrounding the room with flowers and seating the listeners on the floor raised the number of his followers. He became one of the first well known western teachers of meditation and esoteric traditions.

When his follower count increased, Franklin Albert Jones founded the religious movement The Dawn Horse Communion. He went back to India for his fully enlightened stage to be recognized, but he and Swami Muktananda disagreed on a variety of questions, which ended their relationship. Upon his return to the United States, Jones became known as Bubba Free John and divorced Nina. In 1974, he obtained a hot springs resort in Lake County, California and moved there with a group of selected followers. He changed his name numerous times, but in 1994 finally settled for Adi DaSamraj.

From 1973, Adi Da began to use more unconventional ways of instruction and adapted the traditions. In his presence, some of his followers had profound metaphysical experiences. He also guided his followers in the form of psychodrama- sexual theater, which often included public and group sex. He also encouraged drug and alcohol use and did not forbid meat and junk food. He began to criticize conventional marriage, and many couples in the group divorced or switched partners. In 1983, he and a group of followers moved to Naitaba island in Fiji, where he continued to live until the end of his life.

In 1985, he attracted a lot of attention as a spiritual leader and was often covered in magazines like San Francisco Chronicle, Mill Valley Record, and many others. He also went to speak on television and talk shows. He was accused of abusing his spiritual leader power. Many of his previous followers were interviewed and alleged that Jones was forcing them to engage in psychologically, sexually and physically abusive behavior, as well as the church committing tax fraud.

Franklin Albert Jones and his organization were sued for fraud, intentional infliction of emotional distress and false imprisonment, as well as for assault and battery in 1985. The court sought $5 million pay in damages. The suit was dismissed the next years, but other lawsuits followed over the course of next years. Jones settled in several cases with payments and confidentiality agreements. The legal proceedings damaged the church both financially and spiritually.

In 1986, Franklin Albert Jones began to feel distressed about what was left of his work and experienced a physical and psychological crisis. He was diagnosed with exhaustion and stress, but he described this experience as death and resurrection. From this point forward, he began to meditate intensively to “participate in his enlightened state.” Years before, Jones had predicted that in 2000 he would be recognized by the world or his unique spirituality. When this failed to occur, Jones experienced another breakdown. Since then he began a period of a silent spiritual blessing to counter the negativity of the world.

He encouraged his followers also to take up the silent spirituality. The same year, several followers of Frederick Lenz joined Jones movement, which upset a large group of his long-time followers. They felt like Lenz’s followers were privileged. In his final years of life, Jones began to exhibit his artwork and photography. He died of a cardiac arrest in his home in Fiji on November 27, 2008.