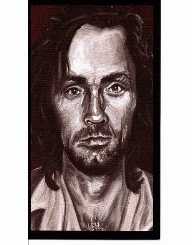 Charles Manson an American notorious criminal and assassin. Born on November 12, 1934, he was the leader of the quasi-commune known as Manson Family, which started in California in the late 1960s. Within five weeks in the middle of 1969, the Manson Family committed nine murders within four locations. Actress Sharon Tate was one of the notable people who suffered from their barbaric act under the instructions of Charles Manson.

Helter Skelter, a term he derived from the Beatle’s song, of the same name inspired his murdering spree as he believed the term meant a coming apocalyptic race war. Hence, the murdering as a was a way of participating in the war. He was arrested and found guilty of conspiracy to commit murder and has since 1971 been sentenced to life imprisonment at Corcoran State Prison in Corcoran, California.

Charles Manson was born on November 12, 1934, in General, Hospital in Cincinnati, Ohio by a 16-year old Kathleen Maddox. Since Kathleen as unmarried at the time, his biological father Colonel Walker Scout could not give him his name. His birth name at the time was "no name Maddox" and later Charles Milles Maddox. However, after his birth, Kathleen got married to his stepfather William Eugene Manson who worked as a laborer. Kathleen filed a paternity suit against Scout, and the outcome resulted in the agreed judgment in 1937.

According to Manson, his mother was a heavy drinker and once sold him to a childless waiter for a glass of beer. Most of his childhood stories could not be verified as he gave different statements in different interviews after he was arrested. Manson’s upbringing was taken over by his aunt and uncle after his mother, and her brother were arrested and sentenced to five years imprisonment for robbery at Charleston, West Virginia in 1939. Kathleen went for Charles Manson after her parole, and since she had no home, she and her son lived in a series of a run-down hotel room. As a helpless mother he sought to take Manson to a foster home, but since there was none at the time, a court ordered Manson be sent to the Guilbault School for Boys in Terre Haute, Indiana. He, however, escaped from the place after ten months.

After running from the Guilbault School of Boys and subsequent rejection by her mother, Manson lived on the street and turned to stealing. His first identified crime was the burglarizing a liquor store and using the proceeds to rent a room. He did same to other stores but was later arrested and sent to an Indiana juvenile center. Manson was then sent to Boys Town after he escaped just after a day at the juvenile center. He, however, escaped again after four days but this time with another person who Charles Manson engaged in armed robberies while returning to the other boy uncle’s home. After two break-ins of a grocery store, he arrested again and sent to Indiana Boys School. He was 13 years at the time and recounts he was sexually abused while there.

In 1951, Charles Manson once again escaped with two other boys. The three engaged in several robbery acts but were arrested in Utah while driving to California in stolen cars. The acts of taking a stolen across a stake line was the Dyer Act and therefore his crime was treated as a federal one hence, was sent to the Washington D.C National Training School for Boys.

After spending some time at the Washington D.C National Training School for Boys, Manson was transferred to the Natural Bridge Honor Camp upon the recommendation of a psychiatrist in October 1951. Due to his posture and attitude, he was deemed dangerous and was transferred to the Federal Reformatory in Petersburg, Virginia. Charles Manson was later moved to the Federal Reformatory at Chillicothe, Ohio due to some serious disciplinary offenses. In 1954, he gained parole after nine months at the reformatory for exhibiting good work habit and having pursued education upgrading on his lower fourth to the upper seven grade

.Charles Manson lived with his aunt and uncle in West Virginia while honoring his parole conditions but later moved with his mother to another place. Manson picked up some small jobs but also engaged in auto theft after he got married. He moved with his wife to Los Angeles in a stolen car and just after three months of their stay, he got arrested as a second-time offender of the Dyer Act and was charged with a federal crime. His wife was pregnant at the time. He was given five years on probation after a mental evaluation. He arrested again in Indianapolis in 1956 after failing to attend a court hearing in Los Angeles on the same charges.  This time, he was given three years imprisonment at Terminal Island, San Pedro, California after the probation was revoked.

Charles Manson married Rosalie Jean Willis, a hospital waitress in 1955. According to him, the marriage brought happiness into his life. The couple had a child but divorced after Rosaline received a decree of divorce in 1958. In 1959, he married Leona, a woman who had a criminal record for prostitution. She had a divorce in 1963 and claimed he has a child with Manson, called Charles Manson. Manson was in prison then.

After his first prison term, Charles Manson received five-year parole in September 1958 and lived on the support of his girlfriend with a wealthy parent. He could not stop his thievery acts, and in 1959 as he tried to cash a forged US Treasury check he had stolen from a mailbox, he was arrested. He pleaded guilty to the offense, but the charges were later dropped but with a suspended ten year sentenced and probation. This was a woman with an arrest record for prostitution called Leona pleaded with the court she would marry Charles Manson if he was freed.

He was arrested again for violation of the Mann Act as he took the new wife and another woman to New Mexico for prostitution. He was held for questioning but later released. He disappeared from the scene afterward, but a bench warrant was issued for his arrest for violating his probation conditions and the Mann Act in April 1960. He was arrested in Laredo and returned to Los Angeles and was made to serve his suspended ten-year imprisonment at the Los Angeles County Jail. In 1961, he was transferred to the United States Penitentiary at McNeil Island. He had an early release on March 21, 1967.

After his release, Charles Manson who was addicted to a crime he formed was came to be the Manson Family. The group engaged in several murders. He was arrested and a suit People v. Manson, Charles Milles et al and People v. Watson, Charles Manson with Vincent Bugliosi heading the prosecution team, Manson was sentenced to life imprisonment. The sentence was related to the Manson Family crimes and Helter Skelter.

Some of the crimes committed were the killing of a pregnant woman and ordering the murders of several others. While serving his sentence, he gave for major interviews in the 1980s including one by Tom Snyder at the California Medical Facilityaired on NBC’s The Tomorrow Show on June 13, 1981. Charlie Rose also interviewed him on March 7, 1986, for CBS News Nightwatch at the Quentin Prison which won Best Interview for national news Emmy Award in 1987.