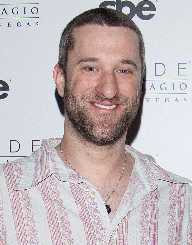 Dustin Neil Diamond is an American stand-up comedian, musician, actor, and director. Born on January 7, 1977, he started as a child actor playing smaller roles in films. He had a breakthrough for playing the role of Samuel “Screech” Powers in the TV shows like Saved by the Bell: The New Class, Saved by the Bell: The College Years, Save by the Bell: The Hawaiian Style and Good Morning, Miss Bliss. He has also played roles in films like Hamlet A.D.D, Pauly Shore Is Dead, Dickie Roberts: Former Child Star, Tom Goes to the Mayor and Duck Dodgers.

Dustin Neil Diamond was born on January 7, 1977, in San Jose, California to a Jewish family. His father Mark Diamond is of Ashkenazi Jewish descent and his mother of an English, Irish, and Scottish descent. Mark was a digital electronic tutor for a computer-processing firm, and his mother worked for Pacific Bell as a computer operator. Diamond started his education at Zion Lutheran School. He holds a black belt in Karate.

Stand-Up Comedy And Others

After Saved by the Bell, Dustin Neil Diamond started a career in stand-up comedy. He has since had some performance tours. Diamond is a staunch supporter of professional wrestling he was part of the Memphis Championship Wrestling in 2000. He contested in Hulk Hogan’s Celebrity Championship Wrestling.

Dustin Neil Diamond is the founder of the alternative metal band Salty The PocketKnife, where he plays bass. After recording their first album, the band dismantled due to internal conflicts. He was the writer of most of the band’s songs. He has been involved in several reality shows.

He is the author of the book Behind the Bell, 2009, in which he discloses inside story of crew and cast of the show. He talked about how he was ignored by other casts of the show.

In 2006, a sex video of Dustin Neil Diamond titled Screeched – Save by the Smell was released into public domain. The video had Dustin Neil Diamond having sex with two women. However, in an interview on a show on the Oprah Winfrey Network, “Where Are They Now” he disclosed that his appearance in the video was staged. According to him, his involvement in the video was fake. In 2006, Diamond tried to sell 30,000 t-shirts to safeguard his ownership of his $250,000 Wisconsin home. Each t-shirt was to go for $15 - $20. Some buyers claim they never received the t-shirt even after paying for it.

Dustin Neil Diamond is married to Jennifer Misner, his long-time girlfriend. The couple married in 2009 after staying together for years. Jennifer is rumored to have suffered a miscarriage to ectopic. The two are separated now. He had previously dated actress, Candace Cameron, in the mid-1990’s. In 2005, he started the Dustin Diamond Foundation to help organizations that care for children. All this started after his then-girlfriend loss their child to ectopic.

Dustin Neil Diamond has been arrested many times for different offenses. On December 26, 2014, he stabbed a man with a switchblade knife after a bar brawl in Ozaukee County, Wisconsin. He was arrested with his fiancée, Amanda Schutz who faced charges of disorderly conduct. Amanda was fined $500. Diamond, on the other hand, was convicted on May 29, 2015, of carrying a concealed weapon and disorderly conduct.

He was sentenced to four months in prison on June 25, 2015. After serving three months, he was released on probation. However, he was re-arrested in May 2016 for violating his terms of probation.