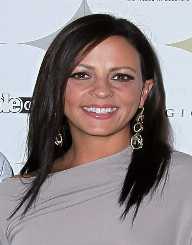 American country music singer and songwriter Sara Lynn Evans was born on February 5, 1971, in Boonville, Missouri, United States of America. Hailing from a Welsh, English, Irish, and Native American ancestry, Sara was the oldest among the seven children of her family. She spent the early days of her childhood in Franklin, Missouri on a farm outside Franklin, Missouri. Her family was engaged in farming there and used to raise corn, beans, tobacco and livestock for a living. However, the lack of prosperity and wealth did not hinder her parents from giving her a happy upbringing.

Sara Evans grew up listening to the fairytale stories her grandmother used to tell them. Her family was very fond of music and even had a family band comprising the family members. The Evans family band traveled on weekends and visited different summer festivals and Church revivals performing bluegrass gospel music. Sara, along with her two elder brothers, started performing in the Evans family band since she attained the age of five and also participated in the tour programs.

An automobile accident involving an auto occurred in front of her family home, and it left Sara Evans with two broken legs with multiple fractures. She used a wheelchair during her recovery. She had to raise money by singing traditional country songs to foot her medical expenses. Gradually, the news of her musical talent spread far and wide, and her popularity grew to such an extent that the name of her family band was changed from Evans family band to Sara Evans Show. At age 16, she started performing in nightclubs in Columbia, Missouri.

In 1991, Sara Evans moved to Nashville, Tennessee to pursue a career in music. Before 1991, she visited the city along with her father at the age of eleven and even recorded a single "What Does a Nice Girl Do in the Meantime," with the song "I'm Going to Be the Only Female Fiddle Player in Charlie Daniels' Band." The single largely went unnoticed. She initially struggled for her day-to-day existence and started waiting tables at the Holiday Inn on Briley Parkway for a living with an aim to meet someone influential in the music industry. She met fellow musician Craig Schelske, who tried to impress her to join his band based in his hometown of Oregon.

Sara Evans went to Oregon in 1991 accepting the offer of Craig and spent the next three years performing in his band traveling throughout the Pacific Northwest. In 1993, she married Craig and eventually returned to Nashville in 1995. She immediately began recording demos. Well-known Nashville songwriter Harlan Howard became quite impressed with her voice and wanted to use the voice in his 1964 classic "Tiger by the Tail." With Howard’s help, Sara became successful in bagging a contract with the recording giant RCA Records.

Sara Evans came up with her debut album ‘Three Chords and the Truth’ on behalf of RCA Records in the fall of 1997. The three singles viz., "True Lies," the title track, and "Shame About That" failed to reach even the top 40 of the Billboard Hot Country Songs chart. However, the album garnered strong critical acclaim for its neo-traditional country sound. Her second album, ‘No Place That Far’ was released in 1998. Among its three singles, the lead single "Cryin' Game" failed to reach the top 40. However, the second single and the title track hit the jackpot, when it became her first number one hit on the Hot Country Songs Chart in March 1999. The album was certified Gold by the RIAA.

On October 10, 2000, Sara Evans' third studio album ‘Born to Fly’ was released. The album’s title track which was also the lead single reached the number one hit on the Hot Country Songs Chart. There were three more singles in the album. The first two reached the top 10 and the third top 20. The album got the certification of  2× Platinum by the RIAA in 2004. ‘Born to Fly’ was declared ‘Video of the Year’ at the 2001 Country Music Awards. At the Country Music Association Awards ceremony, Sara became the most nominated artist with an overall seven nominations in her favour.

The fifth studio album of Sara Evans ‘Real Fine Place’ was released on October 4, 2005. The lead single-cum-title track "A Real Fine Place to Start" rose to the No. 1 position on the Hot Country Songs chart and also reached the Top 40 of the Billboard Hot 100. The album was certified Gold by the RIAA and became the best selling album of her career. She bagged the Top Female Vocalist Award in 2006 at the 41st Annual Academy of Country Music Awards primarily due to her extraordinary effort in combining the contemporary sounds with traditional country instrumentation and themes in ‘Real Fine Place.’

Sara Evans married fellow musician Craig Schelske on September 25, 1993. The couple was blessed with two daughters, Audrey Elizabeth and Olivia Margaret and a son, Avery Jack. She divorced her first husband in 2007. She married Jay Barker on June 14, 2008. Jay Barker was a former American professional football quarterback and a current Birmingham radio host. Sara now lives with her husband and three children in Mountain Brook, Alabama, a suburb of Birmingham, Alabama.