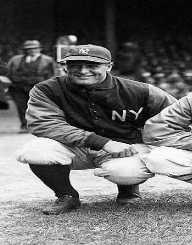 Henry Louis Gehrig (born Heinrich Ludwig Gehrig) was born on June 19, 1903, in Manhattan, New York.  Gehrig was the second child in his parent’s family, who immigrated from Germany. Gehrig’s two sisters and brother died at an early age. His father was a sheet metal worker by trade but didn’t work due to his alcoholism. His mother took care of the family, and Lou often helped her.

Lou Gehrig went to the Commerce High School in New York. When he was 17 years old, Lou caught national attention in a baseball game at the Cubs Park. His team was already leading, when Gehrig hit a grand slam out of the major-league park, which was an astonishing accomplishment for a 17-year-old boy.

Gehrig graduated in 1921 and went to Columbia University on a football scholarship. He wanted to become an engineer. Before his first semester began, New York Giant’s manager John McGraw approached him and advised him to play baseball in the summer professional league. He assumed a name Henry Lewis so that his collegiate sports eligibility wouldn’t be jeopardized.

Still, he was discovered and banned from collegiate sports in his freshman year. The following year, he returned to sports for Columbia Lions football program. In 1923, he started to play first base and pitch for the Columbia baseball team.

On April 18, 1923, the Yankee Stadium was inaugurated. Gehrig was playing for Columbia against Williams College. Although his team lost, Gehrig set a new team record by striking out seventeen batters. During this game, Yankee scout Paul Krichell was present and was impressed not by Gehrig’s pitching, but by his left-handed hitting. On April 30, Gehrig signed with the New York Yankees.

Lou Gehrig made his major league debut in 1923 when he was only 19 years old. His first two years with the team, Gehrig got very little game time and played as a pinch hitter. His big breakthrough came in 1926 when Gehrig batted .313 with 47 doubles, 20 triples, and 16 home runs. The following season was even more impressive, where Gehrig showed one of the best scores in history. He hit .373 with 218 hits- 101 singles, 52 doubles, 18 triples, 47 home runs and 175 runs, which was then a record.

Yankees reached a 110-44 record in the 1927 World Series. He was named the league’s MVP, but his performance was overshadowed by Babe Ruth’s dominance of the season. Gehrig continued to be overshadowed by Ruth, but he was still one of the highest run producers in the history of baseball.

In 1932 Gehrig again made history by becoming the first player in the 20th century to hit four home runs in a game. Gehrig’s accomplishment was once again overshadowed - Yankees manager John McGraw announced his retirement from the team at the same day.

By 1925, Gehrig had played for 2,130 consecutive games. In some cases, he only made an appearance as the pinch hitter, but other times he continued to play despite his injuries. These injuries included being struck in the head and almost losing unconsciousness, or at sometimes he had been knocked out. In 1934, he suffered form back pain and was assisted on the field.

In the 1938 season, Lou Gehrig reported some physical changes at the midway point. At the end of the season, he stated that he was already exhausted in mid-season for no apparent reason. His results were still above average but were much lower than in the previous season.

At the beginning of spring training in 1939, it was obvious that Gehrig was weaker than before and even his running was affected. At one point, Gehrig collapse at the training park. He could not hit a home run. In April, his statistics were worse than ever, which was shocking to everyone and caused a lot of speculations.

Just recently after playing his 2,130-consecutive game, Gehrig went hitless against the Washington Senators. On May 2, Gehrig told his teams manager that he is benching himself. He took his card out of the team’s line-up. When this was announced in the stadium, Gehrig was on the bench in tears. He stayed with the team for all the season but never played again.

Gehrig’s wife contacted the Mayo Clinic in Minnesota, where Charles William Mayo told them to come as quickly as possible. After six days of intensive testing, the diagnosis of amyotrophic lateral sclerosis (ALS) was confirmed. Gehrig turned 36 the same day. His wife was told that the illness is painless, non-contagious and cruel. He was given not more than three years, with rapidly declining motor function, while his mental status was unimpaired.

Two months after his diagnosis was made, Yankees announced Gehrig’s retirement. On July 4, a Lou Gehrig Appreciation Day was held at the Yankee stadium. His uniform number 4 was retired, making him the first player in Major League Baseball to receive that honor.

Gehrig also delivered a speech at the stadium, which has been called “baseball’s Gettysburg Address.” His speech was followed by more than 2 minutes of standing ovations and has been called the most touching moment in baseball history. In December that same year, Gehrig was elected to the National Baseball Hall of Fame.

After retiring from baseball, Gehrig was appointed as a New York City Parole Commissioner. He had declined other job opportunities, like guest-appearances and public speaking. A month before his death, his condition had deteriorated so much, that he had to quit the job. Lou Gehrig died on June 2, 1941. His remains were cremated and interred at Kensico Cemetery in Valhalla, New York.

Lou Gehrig was married to Eleanor Twitchell from 1936, until his death. They never had kids, and she never remarried. She stated that she would not exchange 2 minutes with Lou for 40 years with another man. Eleanor spent the rest of her life supporting ALS research and died 40 years after her husband.