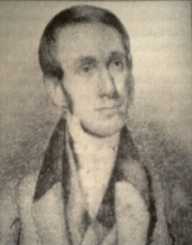 Amos Bronson Alcott was born on the 29 November 1799 in Wolcott, Connecticut.

Amos Bronson Alcott was the son of a flax farmer and was not formally educated. An autodidact, he furthered his education with extensive reading and research. He did this while working on a farm, in a clock factory and later as a peddler in the American South. This self-education instilled in him a life-long interest in education. He sat and passed a teaching exam in 1816 but did not start teaching until later.

At age 26, Amos Bronson Alcott started teaching in Cheshire, Connecticut. As well as reading and writing, he taught art, music, nature study and physical education. The teaching of these subjects was unusual at the time. His methods were considered innovative and experimental. He went on to open a number of schools in Massachusetts, Connecticut and Pennsylvania.

The problem was that he was ahead of his time and his schools often met with opposition. In 1834, Alcott opened a school for the children of wealthy families in the Boston area. The school became known as the Temple School and became well-known because of his progressive teaching methods

Amos Bronson Alcott met Ralph Waldo Emerson in the mid-1830s and through him got involved in the Transcendental Club. In 1940, the Alcott family moved to Concord where Emerson was living. They rented a house which they called Dove Cottage.

Alcott visited England in 1842 and was introduced to Charles Lane and Henry C Wright who ran a school in the UK based on Alcott’s work at the Temple School in Boston. Lane decided to accompany Alcott when he returned to the United States.

Amos Bronson Alcott and Lane purchased a farm, with Lane paying the bills, and together they set about starting a commune based on Utopian ideals. The Alcott family moved to the farm in 1843, but the venture did not work out. May and her children did not enjoy the Fruitlands farm experience, and by 1844 the Alcott family had returned to live in Concord. They bought a house, The Hillside, which features in Little Women, their daughter Louisa Alcott’s classic novel. By 1848, the family were on the move again and living in Boston, returning to Concord in 1857 and lived there until 1877.

In later life, Alcott travelled around the Midwest giving lectures. In time people began to appreciate the wisdom of his educational ideas and started to pay more attention to the concept of transcendentalism.

During the 1870s and 1880s, he was involved in the Radical Club and the Free Religious Association. He was appointed the Superintendent of Schools in Concord in 1860 and 1879; he opened the Concord School of Philosophy. Alcott wrote a number of books Tablets (1868) (Concord Days (1872) and New Connecticut (1881).

Alcott established the Concord School of Philosophy in 1870. He held adult summer retreats which were among the first adult education centers in North America.

Amos Bronson Alcott married Abigail May (1800-1877) in 1830. May came from a prominent Boston family and was an intelligent woman who cared about social issues. She was also an abolitionist and a women’s suffrage advocate. The couple had four daughters and a son.

Alcott’s second daughter, Louisa wrote the classic Little Women and his youngest daughter May was a recognized artist. The family never had financial security until Louisa had success with her writing. She was then able to care for her parents. Abigail May Alcott died in 1877. Alcott was instrumental in getting his daughter to publish her work and in later years she took care of him.

Amos was a vegetarian and followed the principles of Sylvester Graham who believed that eating animal food was not suitable for human beings. Amos Bronson Alcott suffered from a stroke and died on the 4th March 1888.