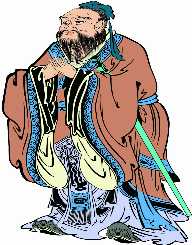 The Chinese philosopher Confucius was believed to have been born in 551 BC in Lu Province, today Shandong. The earliest historical mention of Confucius is around four hundred years after his death in the records of Sima Qian. He was raised by his mother, Yan Zhengzai in modest circumstances.

Confucius was employed by the Prince of Lu in various governmental roles. Disenchanted with the prince’s behavior, he went into self-imposed exile and spent time traveling around particularly the north-east and central parts of the country.

When Confucius was in his late sixties, Confucius returned home to Lu and opened a school teaching moral traditions and ancient wisdom found in the Five Classics.

Confucius did not document his philosophy, and later interpretations are relied upon. These include the Analects, Mencius, Great Learning and Mean. These four works are collectively known as the Four Books of Confucianism. Confucianism became the state religion of China in 2 BC.

Confucius married Qiguan when he was nineteen years old, and the couple had three children.

Confucius died in 479 BC and was buried in Shandong. He was seventy years of age. His grandson Zisi kept the school going after the death of the philosopher.