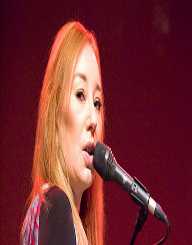 She has a way of incorporating some instruments into her songs to surprise and delight the audience. Her lyrical content is powerful and highly confrontational compared to those of her time. Most of the time, these music are good for the women who are constantly abused. The theme of her works ranges from homophobia, pornography to religion and politics.

On 22nd of August, 1963, Tori Amos was born to Mary Ellen and the Reverend Edison Amos in North Carolina. She started playing the Piano at age two. She was known to have started composing at age five. She joined the Preparatory Division of the Peabody Conservatory of Music after receiving a scholarship. However, by age 11, she took an interest in pop music and rock and refused to read sheet music. She was expelled, and she played at gay bars and piano bars. In 1977, she won the Country Teen Talent Contest with More Than a Friend. She later established herself in Washington D.C before she moved out to Los Angeles for the pursuit of her career.

At the age of 21, Tori Amos had considerably gathered more experiences at the gay bars and piano bars. She also got experience from her establishment in Washington D.C. before she jetted out to Los Angeles for career pursuit. She adopted the name Tori and got a deal with Atlantic in the year 1987. She marketed herself as an 80’s rocker girl with a permed hair and a backup band called Y Kant Tori Read. Tori Amos released her first album which however received little or no attention for the public. However, she had to fight the label for her to have a more accurate album with the reflection of her style in it. Sooner, she got herself Little Earthquakes. This album was the first album with her signature. Thus, her effort paid off, the album was noticed and even went viral in both the US and UK. Hits like Crucify, Silent and All These Years were like gold in the people’s mouths.

This first album of hers was a true account of her kidnapping where she was raped at knifepoint in Los Angeles. The song was a strength to a countless number of sexual assault survivals who approached her for counseling. In 1994, Tori Amos co-founded the Rape, Abuse and Incest National Network with a hotline for assault victims. As at 2006, it already had 1 million callers and currently cited as one of the top charities in the US.

Later in the year 1994, she released another album Under the Pink and Boys for Pele. Surprisingly, she broke the internet by making her chart-topping single, Caught a Lite Sneeze be the first song ever to be available for free download on the internet. The albums were high metaphorical and filled with a lot of feminists themes coupled with complex piano melody. Tori Amos was later established as the 90s’ most essential musician as well as the wizard queen of alternative rock.

With her constant and unpalatable relationship with her record labels, she converted her home barn into a recording studio. Tori Amos founded Martian Recording Studios. She then founded a solo piano sound. She experimented recording with a band and electronic production. The result of it was From the Choirgirl Hotel which is the bestselling album to date. She continued her experiments in the field of music and produced some albums. She later got herself into a new label, Epic. There, she drew themes from Native American history and pornography among others to form the main album Scarlet’s Walk. A Sorta Fairytale, one of the singles off the album was her most successful commercial single to date. She continues with her music career by releasing unrepentant Guidelines (2014) and collaborating They Die by Dawn and Short Stories (2013) among others.

Her major works are Boys for Pele, which earned her a nomination for Best Alternative Music Album at Grammy. It also reached the number 2 on Billboard and the UK top 40, The Beekeeper and American Doll Posse.

Tori Amos married Mark Hawley in 1998 and had a daughter for him two years later. She is a very good friend to Neil Gaiman. She is also proficient and prolific in her support against rape, abuse, and incest.