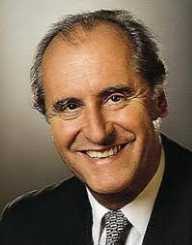 Thomas Klestil is an Austrian diplomat who also served as the country of Austria's president from 1992 until his death. He was also considered as a good friend of The Terminator star, Arnold Schwarzenegger. He died at the age of 71 on July 6, 2004, from suffering multiple organ failure induced by a heart attack that occurred the night before in Vienna.

Thomas Klestil had two marriages in the course of his life. His first marriage was to a woman named Edith, who bore him three children. Shortly after winning his presidential campaign in 1992, he divorced from her. His second marriage took place six years later in 1998 to Margot Löffler.

Born in Vienna, Austria on November 4, 1932, Thomas Klestil's family came from a working class with a father who was employed at a local tramway. For his early education, he attended a local school in Landstraße, situated near the center of Vienna. While attending school, he met and became friends with Josef Erich Zawinul, a future composer and jazz keyboardist.

For his collegiate education, he attended the prominent Vienna University of Economics and Business Administration where he attained his doctorate in 1957.

Upon graduating, Thomas Klestil entered civil service work where the Austrian government employed him. Not only did he work on his home country but also for the Organisation for Economic Cooperation and Development or OECD in short, which is based in Paris, France.

At age 37, he founded the Austrian consulate-general located in Los Angeles in 1969. While establishing the consulate, he met Arnold Schwarzenegger who became a longtime friend of his.

Thomas Klestil also served as the Austrian Ambassador for four years in the United Nations starting from 1978 until 1982 thanks to his fluency in the English language. Aside from that, he was also appointed as Austria's Ambassador to the United States shortly after serving the United Nations in 1982 which he kept for five years until 1987.

Thomas Klestil was elected as Austria's President after winning Presidential elections, succeeding Kurt Waldheim. Klestil was as the Austrian People's Party, the Conservatives, representative for the position and won the highest seat.

He was sworn in on July 8, 1992. However, there was a strain with the relationship with him and among the government elects. In fact, before his winning of the elections, he regularly criticized the Austrian government during his campaigns.

Thomas Klestil showed his support for a Haredi Jewish neighborhood known as Kiryat Mattersdorf situated in the Northern part of Jerusalem. This neighborhood was established in memory of the Siebengemeinden or the" Seven Communities" of Burgenland that got destroyed during the Holocaust and was founded by Rabbi Shmuel Ehrenfeld, or known locally as Mattersdorfer Rav.

Due to Thomas Klestil's service, he became the recipient of several meritorious awards. In 2002, he was granted the Grand Gold Medal with Star from his services rendered to the city of Vienna.

Also from his home country, he was awarded the Great Star of Honour in honor of his services to the Republic of Austria in 1992. He was also a recipient of the Grand Cross with Collar of the Order of the Merit of the Italian Republic which he received on January 27, 1993.