However, they will both need to feel they are content to be laid back. The tiger and snake friendship might have a better business relationship. They are likely to argue in an amorous connection. 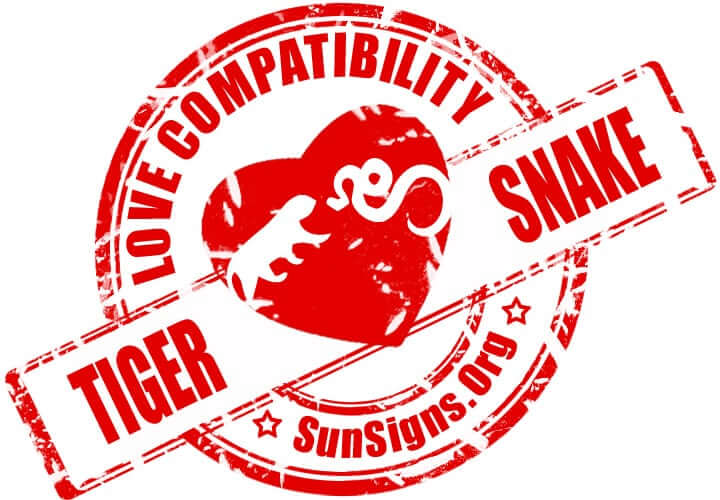 The two Chinese zodiac signs of the tiger and the snake have a lot of differences. The both see things differently, live a different lifestyle, and have different goals. They will have a hard time overcoming these differences.


The tiger and the snake will have a hard relationship because of not being capable of accepting each other or disregard their flaws. Both of them are enthusiastic and naturally suspicious. The tiger woman and snake man will likely have issues believing one another.

The tiger will be bold, brash, and competent. They will be approachable and are nonconformists. They want complete control over their loved one’s life. They want to control where they go and what they do. They are a natural in leadership positions. They are energetic and have the ideas to get things done.

The snake will be quieter. They will typically prefer to use their charm to get their way. They will be sophisticated and smart.

In a tiger and snake relationship are appealing. They might be immediately drawn to one another. The tiger is appealing and hard to say no to. In bed, the snake and tiger are sexually passionate but their love compatible is negligible.

At the same time, the snake is hard to resist because of their sexy charisma when they are dating each other. Eventually the tiger and snake soulmates will realize they will not have enough in common to have a successful relationship together.

The snake can be clingy and envious. They have an insecurity that pushes them towards this kind of behavior. They need a significant amount of reassurance and emotional encouragement. They will look for these things from their partner.


However, the male tiger might not be very inclined to offer the female snake the things they require. They can be affable and dignified. However, they don’t like to believe they are oppressed, especially by their partner. This might lead to the breakup of Tiger man Snake woman marriage.


The snake is frugal with money. The Tiger is free with money and can be wasteful. They do not easily accept advice from others. If they are facing a problem, they might not want to listen to their partner’s solution.

The tiger will be outgoing and will not tolerate the snake being secretive or more motivated than them. The snake thinks the tiger is bold. They will have issues with communication. They might have a more successful romantic relationship if they have a friendly relationship first.

A tiger husband and snake wife relationship will have the snake woman more dependable at managing money. She will find his risky attitude immature. The snake will prefer a more settled and profitable partner. The tiger is going to prefer someone more fun for a partner.

A tiger wife and snake husband will not be able to be tolerant of each other. Both of them are independent and will see each other’s imperfections easily. The female tiger will not find it easy to communicate with the male snake and thinks her lover is too straightforward.

Share
Previous Which Disney Prince Is Your Boyfriend?
Next Tiger And Horse Chinese Zodiac Compatibility