There is an undeniable effect of enchantment caused by the appearance of a rainbow. The view is often breathtaking and exciting, often leaving spectators breathless or pensive. In addition to the mysticism in the appearance, the rainbow can provide us with powerful life lessons.

Take for example, the symbolism of the rainbow. The rainbow is a comprised of seven different colors. Each of these colors is vibrant and beautiful, and each one is different than the next. This conveys a beautiful message of inclusiveness and cohesion. It demonstrates how beautiful diversity can be.


For this reason, the rainbow symbol has been adopted by many groups or demographics that pursue equality. The rainbow meaning teaches us to embrace our own differences and the differences of those around us.


By surrounding ourselves with people who are different from ourselves, we allow ourselves to be challenged. This can help us expand our minds and grow spiritually. 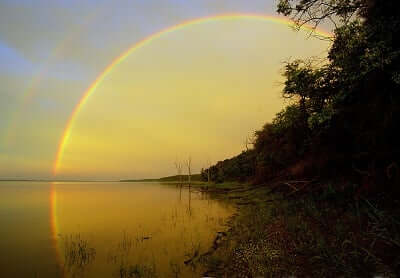 The rainbow symbolism also serves as an obvious symbol of peace and serenity. These feelings are often evoked when looking at a rainbow.


More significantly, rainbows are often seen after a rainstorm when the sun breaks through the clouds. This provides us with a very powerful and important message. Good and beautiful things often follow the darkest storms.

Rainbows can motivate us to continue and endure through dark times. Another way that rainbows provide us with hope and motivation is by being a symbol for good luck. Rainbows are often thought to bring good fortune. In Irish mythology, they are even thought to be the hiding place for pots of gold.

There are darker and equally powerful meanings held by the rainbow. In addition to be symbolic meaning of  peace and hope, rainbows have been associated with fallen soldier of war. In Norse mythology, a rainbow once served as a bridge between the mortal and immortal that casualties of war would cross.

The message that rainbows connect us to the immortal can be seen in many mythologies worldwide, including Japanese and Navajo, though each has a different back story and belief. In our lives, we can see the rainbow as being symbolic of a transition, suggesting a potential change from one phase to another.

In general, rainbows are seen as transcending the earthly realm. Rainbows are the physical symbolism of this ascent. It provides us with inspiration to achieve greater heights and seek wisdom from the worlds beyond. The rainbow is the bridge that closes the gap between these two realms and allows for the possibility for communication. It is symbolic of possibility in many other ways as well. The glowing arch appears high above our horizon and can look close and distant at the same time. We are incapable of finding its end.

The rainbow challenges us to be a better version of ourselves. A more inclusive person, a person who seeks a challenge, a person who desires spiritual growth and a connection to the spiritual realm, a person who endures the darkness in pursuit of the light.

Like the rainbow, these things can seem far away and out of our reach. The important thing, though, is that we keep striving for them. The rainbow symbolism is powerful because it reminds us of the endless possibilities. It shows us vast and magical our world is. Rainbows challenge us to confront and embrace our own potential.