The two Chinese zodiac signs of the tiger and the dragon might be attracted to each other. How successful will this Tiger and Dragon relationship be in love?

Both the Chinese horoscope signs will need to work to keep the Tiger Dragon friendship balanced. Then they will be able to have a daring partnership. 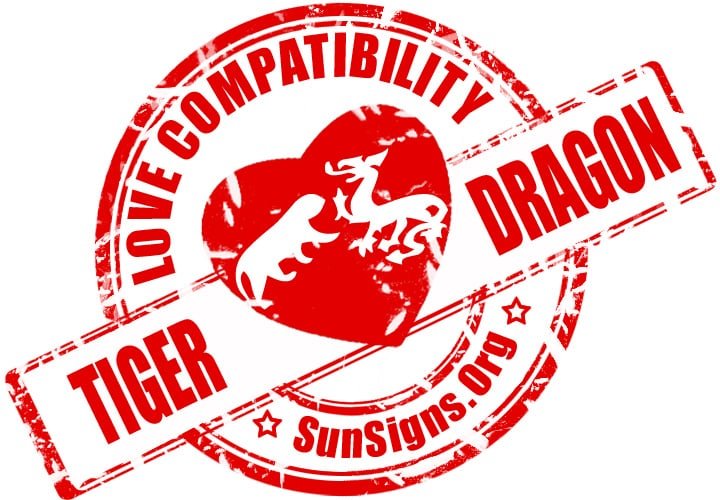 The tiger and the dragon relationship will be full of romance and combustion. They will challenge each other. At the same time, the tiger requires freedom first as they are very sensitive. They also have a lot of kindness and acceptance.

The tiger and the dragon in love both can more than keep up with each other’s higher levels of energy. Even in bed the Tiger and Dragon will keep each other on their toes with their sexual deeds. The dragon is bold and brave. The tiger is brave and confident. They are spontaneous and fickle. However, they need emotional encouragement from their partner.

The tiger and dragon as soulmates will be exciting and interesting. They both have personalities that are very magnetic. The dragon is uniquely capable of taking on any challenge. They might feel confident in taking on the challenge of the partner’s nature. They might not be impulsive but they can be somewhat spontaneous which will be adored by their lover.

The tiger and the dragon will both have to compromise a lot to make the relationship successful. Both have personalities that might make them better friends or a couple. They will not have a boring or routine relationship. Both will be energetic and open-minded. They will see each other as exciting. However, they both will need to keep their independence to be happy.


However, the Tiger man and Dragon woman might not be attracted to each other for very long when they are dating. They both want power. The dragon female wants to control whatever they can, people and situations both. At the same time, the male tiger wants complete control. They both will be fierce in a disagreement. Then the breakup of this match will happen sooner or later.

The tiger man has a lot of respect for the dragon woman. However, he will not let the female dragon win any arguments. If she tries to make the male tiger give in, they will likely have more arguments. She will want to overrule and own the tiger.

The female tiger and the male dragon both have short tempers and they do not like to be controlled. The tiger woman and dragon man will both need to respect each other’s requirement for independence.

The tiger and dragon love compatibility will improve if they keep different groups of friends and they take needed timeout. Both of them will work well together if they are in a business relationship or a romantic relationship.

A tiger wife and dragon husband will be attracted to each other. The tiger and dragon marriage will have its share of arguments because of their impulsive behavior. But they might find disagreements exciting. A tiger husband and dragon wife will likely form an ideal couple.