How good or bad is the love compatibility between a Taurus and Scorpio emotionally, mentally and sexually? Read on…

What do you get when you have a Taurus and Scorpio in love? You can have the most profound and amazing relationship ever or you can have absolute chaos. Taurus is the sign of the bull which can be both a good and bad thing in regards to personality and goals.

The Scorpio’s sign is of the scorpion which might scare you away but it is not threatening or terrifying as it may seem. If you are a Taurus who wants to date a Scorpio or vice versa look to this information to find out how you can make your romance begin and last in this Taurus Scorpio love compatibility. 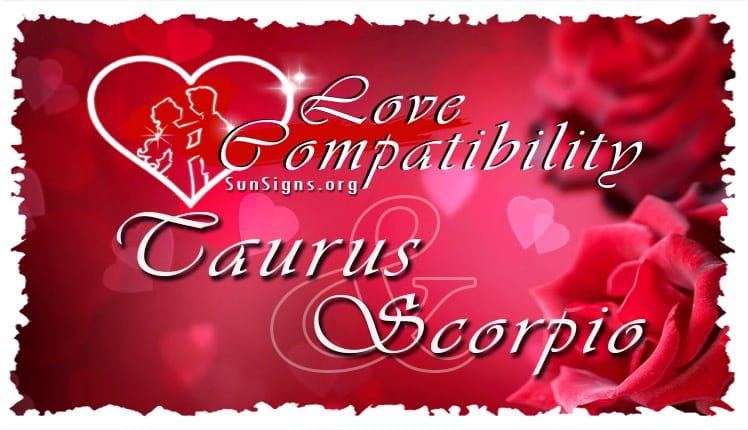 A Taurus man or woman have many great traits that work well in a relationship. A Taurus is very loyal and tries to make sure that nothing bad happens to their friends and family. They got out of their way to stand up for those that they love. They are also quite patient in relationships.


In a Taurus and Scorpio marriage, they are generous in their affection by showering their loved one with attention and intimate adventures. They do not shy away from showing how much they feel about their significant other. The Taurus sexually are very touchy feely when it comes to relationships. They are always kissing and touching their loved one.

The Taurus and Scorpio in bed are great at sexual chemistry and seduction. They love to role play and try new things that would further increase intimacy between the Taurus Scorpio soul mates. They love to give more than receive and try to make sure that their loved one is completely satisfied.

In the Taurus Scorpio love compatibility both are truly loyal. They become fast friends with and look out for each other even if the Taurus and Scorpio friendship ends. The Scorpions are very protective of their loved ones and are not afraid to fight to make sure they are safe. They match Bulls in their ability to make sure their home and lives are safe from harm.


In this Taurus and Scorpio compatibility, the Taurean finds an equal partner in stability due to their need for a comfortable and successful relationship. Scorpios hate to be unsure about anything in life and always take the steps to make sure their ideas and dreams are realized. A Taurus man or woman helps to back them up by providing insight and understanding.

Scorpio men and women are very observant in a relationship. They are able to instantly tell if their partner is in a bad mood or wants attention. They listen carefully to what their partner is trying to convey which the Taurean likes in a significant other. They are also quite resourceful when it comes to getting what they want.

In a Taurus Scorpio marriage, the bull enjoys the competitive spirit of the Scorpio who would stop at nothing to get what they have set their eyes upon. They match them in their ability to give out gifts and affection free from the heart due to their want to share all that they have acquired from their resourceful personality.

Sexually Scorpio are also very passionate about what they want especially when it comes to intimacy. They do not hold back or not speak up when they feel like they are not getting enough attention from their partners. They also make sure to tell their partners what exactly they want when it comes to sexual pleasure. The Taurus is happy about his due to their need to satisfy their partner sexually. Scorpio are very happy when catered to by the more generous Taurus and makes sure that they know how much they appreciate it.

In this Taurus and Scorpio compatibility, the scorpion are also straight forward in saying what they want to say. They love to tease and throw their partner’s off with direct statements which is considered a good time by Taurus’ who love spontaneity and randomness. They get a kick out of the silliness that a Scorpio does in a need to make their partner laugh or have a good time.

With all of these good things that comes from a Taurus and Scorpio love compatibility, there are also some bad things as well. Scorpio can be very sensitive and may misconstrue everything that you say to them. One wrong word can set them off into a reactionary mode to fight back against what they deem to be an attack against them. The more easy going Taurus does not like this and may get upset at how everything that they say is putting the Scorpio on edge. It can be a constant struggle over what to say without a fight always occurring.

In this Taurus and Scorpio compatibility, the Taurean can be stubborn to the point of no resistance which makes the Scorpio combative and spiteful. They see themselves as having the right answer or idea and when told otherwise they do not change their mind or compromise.

Scorpio who like to know that their opinions are valued would not like to allow any stubborn behavior from their partner to continue. They fight and rally against them until they finally change their mind. If the Taurus does not bend to the Scorpio’s will, then the Scorpio would become passive aggressive in that they will ignore and give the Taurus the silent treatment for as long as possible in a need to win or be right.

Scorpios can be extremely jealous in a relationship which can create problems for the more giving Taurus. Taurus at first would like that their Scorpio partner is jealous which shows just how much they care about them but after a while it becomes annoying and irritating.

Every person that the Taurus meets or befriends is seen as a person who is trying to come between the Taurus Scorpio couple. The Taurean will spend a majority of their time defending themselves and trying to prove that all that the Scorpio is saying is wrong.

In this Taurus Scorpio love compatibility, the scorpions are emotional beings but can become overemotional when feeling insecure or upset. They can go from calm to angry quickly over the smallest of things when even not provoked which can make their lover feel confused constantly.

The Scorpio can really get angry over a fight and end up yelling and screaming to drown out the Taurus’ words which ends the fight. Taurus can also be lazy in a relationship which would drive their mate mad due to their need to always be doing something productive and resourceful. Fights over doing things together will occur constantly in the due to this lazy personality in the Taurus Scorpio compatibility.

In conclusion, there are both good and bad qualities about the Taurus and Scorpio love compatibility. They both have similarities that can make a relationship flourish but also fail due to an inability to move past flaws that they have.

They both have specific personality that complement each other which can make for a rewarding relationship. With everything else with just the right amount of self-reflection, compromise and understanding, a relationship between a Taurus and Scorpio zodiac match is able to work.