Dog and Rooster compatibility describes a relationship between partners with intense romance as they bond. More so, it is essential to fall in love with someone with good personality traits that will give you the nature you want. Besides, your brain will control your love life. You need to have a serious conversation with your partner and discuss your future goals. Perhaps, it is easy to fall in love for the first time but maintaining a relationship is the hard part. Equally, you never betray your partner because you are suitable for each other.

Are Dog and Rooster compatible? Ultimately, it is essential to recognize the issue that might hinder your relationship. Besides, it would help if you did something special for your partner to make your relationship warm. Again, when you recognize your shortcomings and deal with them early, your connection will remain intact. Notably, it is essential to rediscover one another because life will become easier as you move on.

According to Chinese astrology compatibility, the Dog Rooster compatibility is often a poor match, regardless of the circumstances. When time goes by, they will become one of the best couples because they understand what is best for them. Also, it is good to give time to everything because everything grows within the right time.

The Chinese zodiac sign Dog is a skittish and unpredictable sign that views itself as trustworthy but has serious issues trusting others. The Dog tends to have inhumanly high standards of ethics and behavior, up to which even they cannot possibly live.

This impossibility does not in any way impede the Dog from believing that it does, however. Anyone who cannot measure up to these standards is likely to be informed, at length, about their failure. The greatest challenge a Dog, man, or woman will face is learning to relax. Life does not need to be so severe!

Roosters have an eye for detail that many others might envy. However, the Chinese animal sign Rooster uses this keen and discerning nature in any way possible to ensure that it is always the center of attention and power. A Rooster man or woman is motivated entirely by self, living, and breathing control. 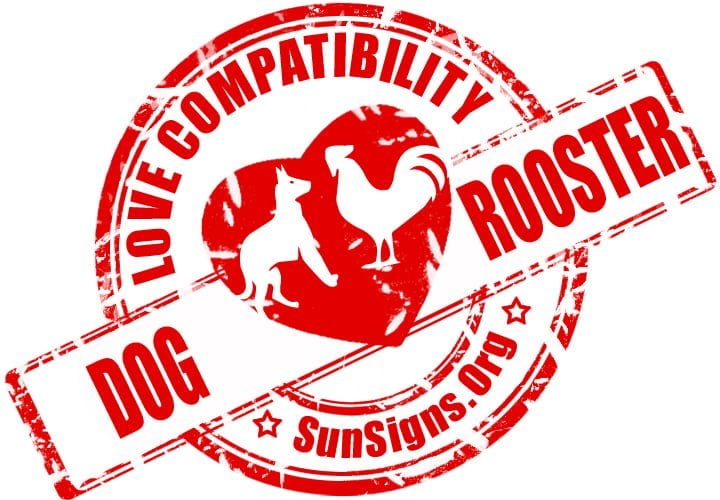 The Rooster is domineering in all things and will not rest until it is in charge. On the upside, they are blatantly frank, open, and honest. They are not prone to playing games or deception of any sort. They would instead plow over an obstacle, proving once and for all that it wasn’t any challenge than circumvent it with subterfuge.

Any Dog and Rooster friendship is likely to be sorely tested by the conflicting natures of the two Chinese horoscope signs. Both are strong of will. The Dog tends to believe that it is holding fast to its principles when it may just be closed-minded and stubborn.

The Rooster zodiac sign feels a constant compulsion to impose its will on its surroundings and has a nose for avoiding telling the truth. The Rooster, male or female, is more than likely to notice precisely the moment the Dog becomes dogmatically entrenched. Then they will call that out as nonsense. As might readily be imagined, this is the farthest thing from diplomatic.

Rooster in Relationship with the Dog

In bed, the Dog and Rooster are difficult partners. Since their love compatibility is negligible, even sexually, the Rooster will try to be the boss. Mostly, your financial stability brings the bossy part to a relationship. Besides, the man should always control a relationship because that is their part to play.

In all likelihood, things in a Dog and Rooster relationship will not get this far. There is, however, a small light at the end of this long and miserably dark tunnel. The Dog man and Rooster woman soulmates are very loyal to those they see as trustworthy friends.

Dog in Love with the Rooster

If the many, and often not minor, differences and obstacles between these two can be circumvented or overcome, then the Dog Rooster compatibility can be a spectacular, long-term success.

Expect this to be the exception rather than the rule in Chinese astrology compatibility. Furthermore, expect any platonic or romantic relationship between these two to require constant and herculean effort to create or maintain. Even while the Dog, male or female, is dating a Rooster, they will be intimated by their partner, often leading to an immediate breakup. 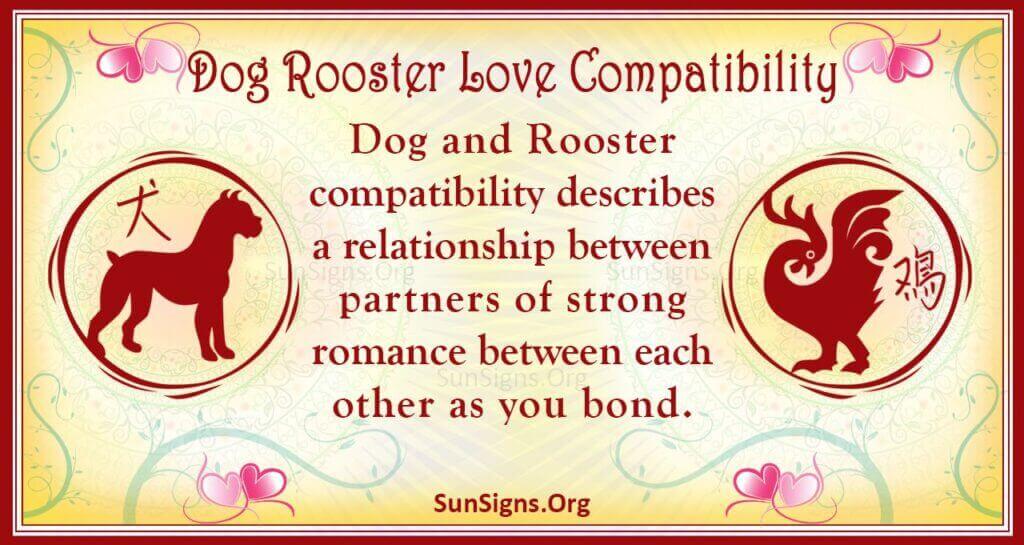 Despite all of the problems that other relationships might cause, a business partnership between the Dog and Rooster is one in which these two truly can shine and be tremendously successful. The Chinese Dog will not necessarily mind so much the Rooster wanting or needing to be in charge.

The Chinese Rooster is motivated almost entirely by self-interest, but it is worth remembering that it is often in their best interest to foster and reward loyalty. Dogs will respond strongly to this. They can take direction exceptionally well, and the Rooster can swiftly deal with the odd mood swing.

Both the Dog man and Rooster woman in love tend toward blunt honesty. Each will always know precisely where they stand with the other in the Dog-Rooster marriage. They will pass this same frank diplomacy to everyone they deal with.

Dog and Rooster compatibility illustrates a relationship where everyone is on their own, but they have one goal to accomplish. Deep down in their love life, they love one another unconditionally. Therefore, you should never question the things in some relationship because both partners love each other.