How good or bad is the love compatibility between a Scorpio and Pisces emotionally, mentally and sexually? Read on…

Pisces and Scorpio in love are an excellent zodiac match, and, as a couple, they understand each other almost symbiotically. Unlike their Scorpio lover however, Pisces has no hard shell to hide behind; hence they are more likely to reveal their feelings to those they trust.

But that doesn’t stop the Scorpion from extending their “shell” and protecting their little fish! And Pisces repays this devotion by caring for their partner, and they do so intuitively. They watch their partner’s habits in this Scorpio Pisces love compatibility and learn their partner’s wants and needs without even having to ask. 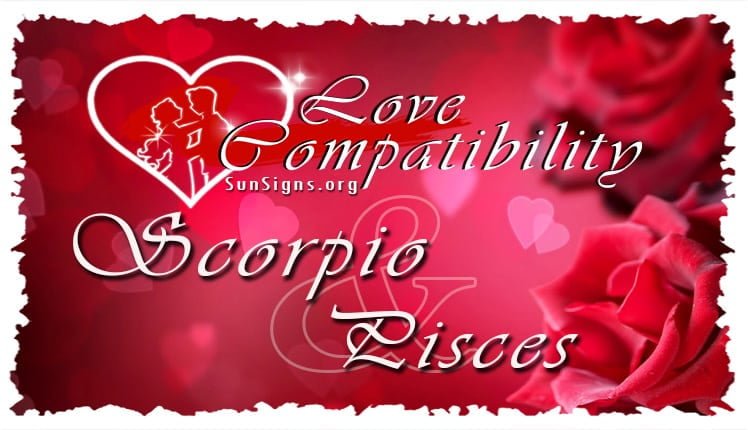 And valiant Scorpio is willing to sting anyone who would hurt their defenseless Piscean lover. But don’t let them fool you. Underneath that hard shell is a sweet, soft, sensitive soul. And the Scorpio man or Scorpio woman might only show that soul to his or her Pisces lover, because they may be the only one they trust.

If a Pisces personality loves you, they will make your world as smooth and comfortable as possible. And you won’t have to lift a finger or say anything. They intuitively watch in anticipation of your every need. You won’t need to ask for breakfast or your clean pants in the morning. Your Fish lover will already know you’re hungry and your pants will be laid out on the bed. This is good news for the Scorpio personality who loves creature comforts, a warm bed, a clean home and a sense that he or she is cared for.

And Scorpio, if you long for a partner that will hold your hand, kiss you in front of even his most macho buddies, go shopping with you and cuddle on the couch, pick a Pisces! And that bond is not limited to your activities, either. There’s no gender stereotyping in the Scorpio and Pisces compatibility!

A Pisces man loves it when his partner builds and assembles things with him. And he doesn’t mind if the roles are reversed either! This, again, is good news for Scorpio who, regardless of gender, tends to like to be in control. This often leads to high-powered careers and positions of authority. And so, again, regardless of gender, Pisces doesn’t mind holing down the fort at home, caring for the kids and tending to their partner’s needs. The Scorpio Pisces marriage is completely symbiotic.

And speaking of symbiotic, these two zodiac signs make a symbiotic connection that is no short of a fireworks display in the bedroom. Unlike Fire signs, who rely on props and physical experiences to enhance their love making, Scorpio and Pisces in bed needs no augmentation; it was immediate and noticeable even before these two even touched.

This is because both the Scorpio and Pisces soulmates feel safe being sexually vulnerable with the other. Vulnerable Pisces feels protected and thorny Scorpio feels safe enough to let his or her guard down So, you may not see the fireworks on the outside, but trust me the fireworks are exploding for these two sensitive lovers. As I mentioned before, especially Pisces man in in love has deep need to be touched and held, so there will be plenty of of cuddling, spooning and pillow talk afterwards.

So if you’re a Pisces born who feels most comfortable when someone is protecting you, gives and definitely needs tender loving emotional support, desires to make beautiful love with hours and hours of pillow talk afterwards? Then choose a Scorpio as your partner! And Scorpio, if you want a sensitive soul who will take care of your needs lovingly and intuitively, who needs the protection only a scorpion like you can give, choose a Pisces partner! The Scorpio Pisces love compatibility can be one that is caring as well as sensual.

Did I mention that Scorpio has a hard shell? It’s Fort Knox hard. And what animal does this star sign symbolize? A scorpion, and boy does Scorpio embody his or her namesake, stinger and all. Now let’s read about the Scorpio Pisces friendship compatibility. The problem is that sometimes that stinger is pointed at soft-skinned Pisces. This is also coupled by the fact that they aren’t always the best at expressing their feelings, so the fish may trip one of the scorpion’s boundaries without knowing it.

Likewise, Pisces men and Pisces women also have invisible boundaries. And they have long emotional fuse, which you have to cross their many, many times before they explode. And for the Scorpio dating Pisces, this explosion seems to come out of the blue for their unsuspecting partner. Why? Because both the sun signs don’t like to set emotional boundaries and he or she does not like to say “no”…even when they should!

The Pisces male or Pisces female especially hates confrontation, even if it might benefit them in the long run. So, a particular incident that you have been doing for years may be the last straw for your Pisces partner, but you’ll never know it until it’s too late! This will enrage the Scorpio birthday person and they’ll go searching, with their stinger poised and ready!!

Another aspect of a Scorpio Pisces love compatibility not managing their emotions is their response to their own hardships. They’re very easy to blame others for what might be their own doing. Pointing the finger of blame becomes a big problem when your partner is a venomous Scorpio male or Scorpio female.

Because the Pisces is afraid of getting stung, this may never manifest itself as an outward battle. Unless the scorpion partner has another planet in Leo or Aries perhaps, but it does manifest itself in a seething rage that’s just below the surface of everything Pisces does. This makes life very unpleasant and sooner or later, Pisces will sneak out the back door for good!

Or the worst scenario of all, the fish subjugates their personality so much to their partner or the Scorpio Pisces compatibility as a whole that they lose themselves. They allow their personality to become “hijacked” by the relationship. This is because Pisces will do anything to keep from fighting, and Mars ruled Scorpio is always at the verge of a battle. By sacrificing his or herself, or sense of self, Pisces believes that he or she is averting a Scorpio Pisces breakup.

Scorpio, you must think before you take your stinger out with your sensitive Pisces, because you’ll regret the results. And Pisces, you need to set boundaries, so you don’t potentially lose yourself in the process of averting an argument.

In conclusion, if the fish and the scorpion can learn to set boundaries and curb their venomous ways, the results of this Scorpio and Pisces compatibility are magical! You’ll have a partner that will work with you in every way, without borders or stereotypes. There’s no such thing as “man’s work” or “women’s work” in the Scorpio Pisces couple’s household. And the love making goes beyond the physical to a plane that even the monks and scholars rarely reach! Just make sure that both of you communicate your needs and boundaries, so that the beautiful, symbiotic relationship you were meant to have will blossom!